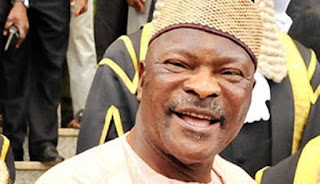 Still smarting from the internal issues of the imposition of candidates for the National Assembly in the recent general election, People’s Democratic Party in Kogi state faces another major trouble.

Former Governor
Ibrahim Idris is accused of engaging in an all-out war to impose his son, Abubakar as the PDP candidate for the Kogi state the gubernatorial election in November.

Emerging details have it that former governor Idris is going about making his son gubernatorial candidate in a manner that is alienating power brokers seeking to help the PDP leverage on the unpopularity of re-election seeking incumbent Governor Yahaya Bello to win the election.

Yahaya Bello is facing groundswell opposition within and outside the ruling All Progressives Congress (APC) in his bid to secure a second term.

Bello’s performance – including owing state workers salaries for months – has greatly affected the popularity of his party.

And the PDP which should cash in on the situation is about to lose the opportunity as a result of Idris’ conducts.

The added information available has it revelations which are downing the morale of PDP members in the state have started coming to fore about former Governor Idris and the upcoming election.

Sources claim to scare off other aspirants the nomination fee for the gubernatorial ticket is now pegged at N75million.

The fee is being protested by other aspirants and their backers.

Insiders claim the former governor is accused of milking those struggling to become the deputy governorship candidate of his son.

Different tales of negotiations and settlements at the former governor’s Abuja home that putting party PDP members on edge in Kogi state the regarding likely outcome of the November gubernatorial election are circulating about the town.

More revelations have it that the pedigree and competence of the son Idris Ibrahim is pushing to become PDP gubernatorial candidate in Kogi state are being heavily questioned.
This development is said to be against the claim that the former governor’s alleged dismissal performance in office strongly contributed to the takeover of the state government from the PDP by the opposition party at the polls.

Insiders claim there is still a bit of hope for the PDP as major players at the national level of the party prepare to intervene in the bid to save the situation before it gets out of control.