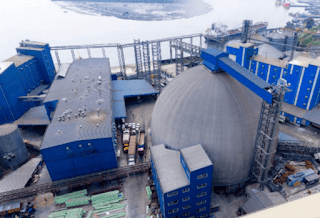 In the face of major threats to Nigeria’s economic advancement the Managing Director of Nigerian Port Authority, Hadiza Bala Usman is insisting on decommissioning the BUA Terminal In Port Harcourt, Rivers State – without following
laid down procedures.

Checks by societynow.ng revealed that at stake is a $400million investment with massive potential to boost the nation’s ailing economy.
The Terminal in Port Harcourt, Rivers State is one of the major life wires of the about to be commissioned BUA Flour, Sugar and Pasta plant in Rivers State.
The $400million BUA Flour, Sugar and Pasta plant can take on direct employment of 1000 workers – locally – and added numbers of staff in other categories.
The projected production of Sugar from the plant added with the numbers from BUA’s plants in Tincan Island Apapa Lagos and Sokoto combined with that of the Dangote group would transform Nigeria into leaders by kilometers in that sector.
‘’BUA’s plant in Tincan Island Apapa Lagos produces 720,000 tonnes a year, the one in Sokoto Churns out 720, 000 tonnes and the about to be commissioned one in Rivers is projected to dwarf these outputs, all these combined with the over 1.4 million tonnes produced by Dangote’s group would make Nigeria the biggest producer and leading exporter of Sugar in Africa and beyond’’ a source stated.
And added ‘’and that is a much needed foreign exchange for Nigeria’s economy’’.
This is outside the economic gains in the production of Flour and Pasta also in the bargain societynow.ng gathered
But ironically, the Managing Director of Nigerian Ports Authority is threatening this big picture.
The Terminal in Port Harcourt is meant to serve as a huge costing transportation route in locating the $400million BUA Flour, Sugar and Pasta in Rivers state.

The BUA Sugar Dome in Port Harcourt is constructed in such a way that raw materials, especially for Sugar will be transported through the conveyor belt from the ships.
This means there would be no need for transporting raw materials with vehicles.
This process eliminates the environmental hazard that comes with spillage.
With the conveyor belt, there is no way water can penetrate the raw materials.
This will positively affect the cost of production.
The arbitrary decommissioning of the Terminal – if it stands – messes up the whole planning and heavily threatens the obvious and inherently economic and environmental gains.
Hadiza Bala Usman claims a letter by BUA to the Nigerian Port Authority seeking approval to carry out remedial action serves as the cause of her action – which bothers on flouting contractual agreements based on BUA’s claims.
BUA in a recent publication insists that Usman failed to explore all the stipulations in the contractual agreements – including arbitration and flouting a court order – before making the pronouncement of ‘’ decommissioning’’ its terminal in Rivers State.
The official explanation released by BUA reads