Details As Emergency Money Man Mompha Is Arrested, Slammed Into Detention On Request Of Interpol! 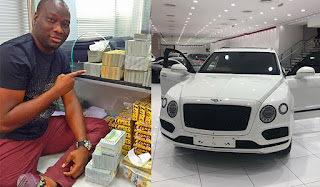 Ismaila Mustapha, (aka Mompha), a self-acclaimed bureau de change operator whose posh lifestyle has made him a darling of Instagram users, has been arrested by anti-graft operatives.
Multiple sources at the anti-graft EFCC revealed that Mustapha was arrested in connection to
alleged graft.

Specifics of Mr Mustapha’s offence, especially the amount and illicit trade involved, could not be immediately obtained. He is detained by the EFCC in Lagos.
Some tweeter users have allegedly reported that the Bureau De change don was arrested over a $5million internet scam.
An Instagram user, @TosinOlugbenga, reported that “Mompha escaped from Interpol arrest in Dubai and he flew to Nigeria secretly. He was tracked through his airline ticket and on Interpol request, he was arrested by EFCC on a $5m internet scam”.
Wilson Uwujaren, a spokesperson for the EFCC, confirmed Mr Mustapha had been taken into custody by anti-graft detectives, but declined to provide further details in the meantime.
The arrest was reportedly a joint operation between Interpol and the EFCC. But Umar Garba, Nigeria’s head of Interpol, told PREMIUM TIMES although he had learnt of the arrest, all enquiries should be treated by the EFCC as the primary law enforcement institution in charge of the investigation.
News of the arrest of Mr Mustapha, widely known by his business moniker ‘Mompha’, spread quickly as a rumour across Nigerian social media Monday evening.

Mr Mustapha has cut a personality of one of Nigeria’s wealthiest socialites on social media, using Instagram to post pictures of his family’s wealth.
In some of his most recent posts on his verified Instagram page, which has nearly 650,00 followers, Mr Mustapha featured a yellow Ferrari and a 2020 Rolls Royce Wraith Eagle VIII he claimed to have purchased for N180 million.
He said he was the first African to own the Rolls Royce and it was only one out of 50 exotic vehicles he owned across the world. Celebrity bloggers claimed the Ferrari was bought earlier this year for N155 million.
Those who knew Mr Mustapha said he has been into bureau de change business for many years and lives in Dubai with his young family, photos of whom he also frequently posted on his page.
Mr Mustapha was described by those who have met him in Dubai as one of the wealthiest Nigerians in the Emirate’s commercial capital.
Still, anti-graft operatives remained concerned by Mr Mustapha’s opulence and continued to follow his financial trail, an official said.
It was unclear whether the suspect had contacted his legal representatives and when he would be charged to court.
The arrest comes as EFCC ramps up its collaboration with international crime-busting bodies like the Interpol and United States Federal Bureau of Investigation to check Internet fraud and other white-collar crimes linked to Nigerians.
Since August, hundreds of Nigerians have been arrested in a sweeping crackdown on suspected Internet fraudsters and money laundering gangs in the U.S. and Nigeria. Some of those arrested during that time have convicted and sentenced to prison by Nigerian courts.
theelites
Posted by MAN ABOUT TOWN at 12:43 PM