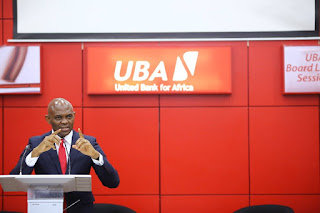 An auditor with United Bank for Africa (UBA) Plc, Ojo Oladimeji, has told a Federal High Court, Lagos, how suspected fraudsters hacked into the bank’s server and fraudulently withdrew N752 million from the accounts of the Flour Mills of Nigeria Plc, domiciled with his bank.
Oladimaji made
sterling revelation on Tuesday, while giving evidence in a criminal charge filed against one of the alleged hackers, Ola Lawal, a.k.a Lawal Roland, who is standing trial on alleged fraud of N46 million, brought against him by the Economic and Financial Crimes Commission (EFCC).

The defendant was arraigned before Justice (Professor) Chuka Obiozor led court alongside his company, DCAN Oil and Gas Limited on Monday, on two counts charge of fraudulent transfer of the same sum of N46 million from the Flour Mills Nigeria Plc, number 1002792889  domiciled in United Bank of Africa (UBA) Plc to the oil and gas account number  0036695765  domiciled in Union Bank Plc.
He pleaded not guilty to the charges, when he was arraigned before the court on Monday.
Justice Obiozor had adjourned till Tuesday, for hearing and determination of the defendant’s bail application and commencement of trial.
At the resumed trial, Oladimeji, who is the  first Prosecution Witness in the charge told the court that a total sum of N752 million belonging to Flour Mills of Nigeria Plc, in his employer’s account (UBA) was fraudulently transferred into 20 different accounts, which the defendant’s company’s accounts with Union Bank Plc, benefited the sum of N46 million.
Oladimeji who was led in evidence by the counsel to the EFCC, Mr. M. K. Hussain, said: “upon discovery that the sum of N752 million has been Fraudulently transferred from from one of our customer’s account, Flour Mills Nigeria Limited, to 20 different accounts, which the defendant’s company’s account was a beneficiary.
“Flour Mills’ account was hacked between June 24 and July 3, 2019, and the total sum of N752 million was fraudulently transferred.
“The defendant’s accounts in Union Bank Plc received N46 million on July 3. We then wrote a letter to our lawyer, Akin Adesomoju, to take up the case with a petition to the EFCC to assist in the investigation, recovery, arrest and prosecution of the culprits, that was how the defendant was arrested and charged to court after the EFCC investigation”.
The witness during cross-examination by the defendant’s lawyer, Ademola Iroko, told the court that he did not know who transferred the money, while the purpose of the transfer was unknown to him.
Oladimeji also told the court that he did not know the name of the Accounts Officer to Flour Mills of Nigeria Plc, but said his bank has the record of how the money was transferred to 20 accounts, which the defendant’s company’s accounts was one of the beneficiaries.
Meanwhile, the defendant and his company have been admitted to bail by Justice Obiozor, in the sum of N50m each with one surety in like sum.
The judge also ordered that one of the sureties must be a landed property owner within Lagos State and in addition a level 15 officer, who must produced evidence of three years tax clearance with verifiable address and must submit their passport photograph to the Court’s registrar.
Justice Obiozor further ruled that the defendant should be remanded in  Ikoyi prison pending the bail conditions.
The matter has been adjourned till December 12, for continuation of trial.
Before moving the motion for bail, the prosecutor told the court that his agency did not grant administrative bail to the defendant because they could not provide verifiable address and that the defendants are still under investigation for a similar offence.
The charges against the defendants read: