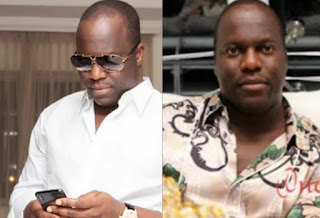 The celebration remains the talk of the town according to the information at hand.
The occasion was the 70th birthday celebration of
Mrs. Lilian Jeremi, the mother of Linda Ikeji’s baby daddy Sholaye Jeremi.
.
The information available to societynow.ng the event transpired on Sunday, October 6, 2019, in Sapele Delta state.

Fierce looking security men took charge of the venue of the 70th birthday celebration where Sholaye gifted his mother a brand 2020 Jaguar XJR.

According to information sourced from news breaker, thecapital.ng the event which had in attendance the likes of former governor of Delta State, Chief James Ibori, Julius Rone, the billionaire head honcho at UTM Group, Greg Uanseru, Scott-Tommey, Raymond Abia, Babatunde Agbede, Lesley Atake and others enjoyed superlative performance from singer Omawunmi.
Describing the kind of fund deployed and flamboyance on parade, the capita wrote in part…
‘’From carefully selected hors d’oeuvre, mouth-watering menus, to afterses that tickle and tempt, and champagnes and cognacs and exotic wines, Sholaye had the guests feasting and bingeing with decent abandon while Singer, Omawunmi was on the bandstand. Mirth and merry hovered in the air. As the guests thrilled to delightful music of Omawunmi, their hair stood on end and they tipped over in merriment – their joy spilling from their souls into the air and sky high into the blue firmament.

‘’Sholaye had a permanent smile on his face as he moved from table to table ensuring nothing was in short supply; a flute with bubbly that never ran short, never leaving his hand. Thus, he went all out to give his mother a memorable birthday celebration never seen before in Delta State.
‘…..Looking radiant and regal in her gold Swarovski stoned George ensemble, Mama was a cynosure of all eyes as she danced with her children and guests. She swayed and shuffled effortlessly underlying her age and reminding guests of her enviable life. It was one party that allowed many of Nigeria’s moneymen to unwind and reconnect in an atmosphere of uninhibited revelry and merriment.
The crowd was select and classy. The ambience was celestial in its gold draperies. And nobody left until the drinks had thinned to a tributary..’’

Sholaye Jeremi shot to public consciousness as a result of his romantic dalliance with celebrity blogger Linda Ikeji.
The romance became a major scandal when Jeremi refused to publicly identify with the blogger when she gave birth with Ikeji later claiming she had to cut him off because he treated her with ‘’so much aggression’’.
https://societynow.ng/he-treated-me-with-so-much-hate-aggression-i-had-to-cut-him-off-completely-popular-blogger-linda-ikeji-reveals-damming-details-about-baby-daddy-jeremi/
Posted by MAN ABOUT TOWN at 11:30 AM