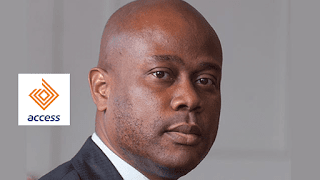 While the investigation of Access bank’s CEO and Group Managing Director, Herbert Wigwe, is being shielded from the public, it is alleged that this development could be connected to
his involvement with the former governor of Abia state Orji Uzor Kalu.

Orji Uzor Kalu, who is currently serving a prison sentence, was recently found guilty of allegations on misappropriation of the finances of Abia state while he governed the state.
And this misappropriation was allegedly enabled by the managing director of Access bank, Herbert Wigwe, who was accused of helping in laundering the money.
The Bank CEO is denying the charges as investigators strive to build a solid case against him.
Herbert Wigwe began his career as a management consultant at Cooper’s and Lybrand, Lagos. Then, after some time with Cooper’s and Lybrand, he went on to qualify as a chartered accountant. He later furthered his career at GTBank where he worked for a decade in their corporate and institutional banking section, and then he rose to become the executive director in charge of institutional banking. Wigwe and his business partner, Aigboje Aig-Imoukhuede, came up with the plan to acquire Access Bank in 2002. The bank, at that time, was a small commercial bank, ranking at number 65 out of the 89 banks in the country. Under Herbert Wigwe’s hand, over the years, Access Bank PLC has risen to become one of the top five banks in Nigeria. Wigwe has remained CEO and Managing director since January 2014. And with his high flying position and years of banking and accounting experience, he can easily manipulate figures and make dirty money come out as clean.
The Economic and Financial Crimes Commission (EFCC) had earlier brought in Wigwe for questioning over the recovery efforts on Slok Group of companies owned by the former governor Orji Uzor Kalu. Access Bank PLC, despite denying their CEO’s arrest, had agreed to this call for questioning, saying it wasn’t a threat to the bank or their CEO but was a mere formality and should raise no cause for alarm. Mr. Herbert Wigwe was accused of not only being involved with Orji Uzor Kalu. The EFCC was also after him for allegedly laundering money for Deziani Madueke, former Nigerian minister of petroleum; as well as alleged inflation of contracts with Akinwunmi Ambode, former governor of Lagos state.
Additional information insidebankinghall.com