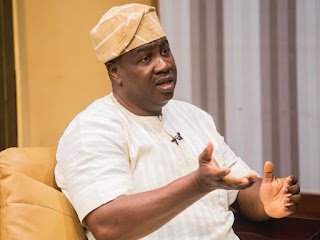 This is
in connection to his involvement in a birthday party held at the Amen Estate residence of Nigerian actress, Funke Akindele Bello and her husband, Abdulrasheed Bello a.k.a JJC Skillz. The Bellos hosted friends and family to a party to celebrate JJC Skillz’s birthday on Saturday.

The business tycoon earlier made a video where he apologised for violating government’s directive meant to curtail the spread of the coronavirus disease.
While the Bellos have been sentenced to 14-day community service, 14-day isolation and a fine of N100,000 after arraignment in court on Monday, Naira Marley who was also present at the party has also been detained by the Police.
According to news reports, Gbadamosi was taken to the State Criminal Investigation Department Yaba.
Gbadamosi who is a real estate tycoon and Chairman of the Amen Estate is also a member of the People’s Democratic Party.
An24.net