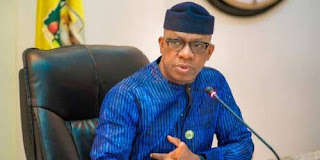 The Governor who said this while fielding questions from newsmen at Oke – Mosan Governor Office, Abeokuta alleged that the strike action was “politically motivated.”
“The entire spectrum of health personnel are all at risk from the person who is the cleaner, the nurses, the pharmacist, the consultant, in all the hospital because the protocol now is that they are to consider any patients that walks in as a COVID -19 patient. To that extent we have provided the required Personal Protective Equipment (PPE ) and training .

“We reached an agreement with them, they signed a memo of understanding which is not done under duress, I meet them with my team , we have increased awe agreed the hazard allowances to 200% at that meeting it increase the hazard allowance to 300% in which I appreciate them and I also mention the fact that we needed to have an opportunity to sit and dialogue.

“And we all left feeling very fulfilled and believing that we have started a new page and surprisingly over the weekend, I was informed that they have began a warning strike. I find it very irresponsible . I find it difficult to believe that this time when we are all putting our fingers on(the deck), trying to think about what to do and how to do (it)?

“This may be politically sponsored, am yet to believe it , but at this point in time anything is believable , if you sit down and see people who graduated whose charge is to look after people’s (life), that is what they are charged (to do). That is what should be paramount to them and not money and we have done our best.

“And I read some medium that someone says that Governor Abiodun should better focus on the health sector as against construction of roads and schools and I think this is a joke, people just at times speak without even thinking .


The OOUTH ARD had embarked upon the strike action following what they alleged as non – committal stance of Dapo Abiodun’s administration towards their demands.

Some of the doctor’s demands include non – implementation of the new minimum wage, hazard allowance, inappropriate remuneration, entry-level and absence of life insurance policy for its members.

But Abiodun said: “it is irresponsible and disappointing that after his administration had done its best for a people whose Hippocratic oath enjoined them to put the life and care of others as first consideration before anything else, they could elect to embark on a strike action and fight over money in the thick of COVID – 19 pandemic when all hands were expected be to on the deck to flatten its curve in Ogun state.”

He added that he has also resolved not to reply those who expected to focus only on the health sector as against construction of roads and schools, dismissing it as “baseless” and a “joke” resulting from people who speak without evening thinking.

He said: “I am aware that some doctors at Olabisi Onabanjo University Hospital embarked on some warning strike last weekend .This a development that I find rather disturbing and I consider it a breach of trust , and I think that

We have engaged our health personnel not just the doctors Because the doctors are only a part of the entire team .

“The WHO said what they saw in Ogun State was simply amazing , what we have done is a legacy to COVID -19 and then some says to me that am focusing on roads and schools, that am not focusing on health care. You know am not in the habit of responding to baseless (issues) and frustrated people.”

He added: “On the issue of ease of lockdown and increase in cases , you know everybody is asking that same question all over the world but the fact is that it is an issue of every leader in each country.

“We are trying to strike a balance between the lives of your citizens and the economy of your country but the reality is that COVID -19 is not going to go in a hurry and we cannot lock down the economy forever.

“We have to find ways to cope, ways to live with COVID – 19 such that COVID -19 itself will have to leave us alone , and those ways are by physically distancing, washing our hands, covering our faces.”