All The Details!...The Dangers In Gernot Rohr's New Contract As Super Eagle's Coach 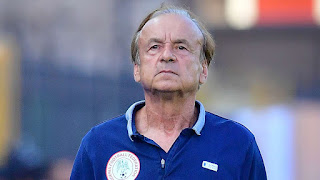 The German has agreed to remain in charge of the Super Eagles until 2022, but will have to negotiate a minefield to even make it that far

Welcome to
the circus that is Nigeria. What a show in store!

Witness: experienced German gymnast Gernot Rohr is doing a high-wire act on a unicycle, while cracking a whip at a snarling lion and juggling three pins with his other hand.

It is impressive. It is also highly unnecessary, but are you not entertained? Are you not on the edge of the seat, eager to see what happens?

If that opening seems overly dramatic, consider this. In signing a contract extension with the Nigeria Football Federation, Rohr finally brought an end to months of speculation about, not just his future, but the future of the national team. He has also acceded to what looks increasingly like an impossible task.

While the contract situation was in the balance, it seemed unlikely the resolution would be anything but acrimonious.

The 66-year-old, though keen to stress at every point his desire to remain in post, was not averse to genuflecting toward offers from other African nations, the equivalent of checking one's watch as a gesture of impatience.

For their part, the NFF seemed bent on exercising greater control and oversight over Rohr's work, almost to the point of neurosis. We know now, per a recent expose, that it is his handling of a verbal promise that caused rancour between previously affable allies, and that it required the pulling of political strings by the German to force the hand of the football administration.

However, while exact details of the new contract remain confidential, some interesting clauses have invariably made their way into the public space. This is, after all, a notoriously garrulous NFF leadership under Amaju Pinnick.

Two catch the eye immediately. The first concerns his salary – Rohr's payment will now be denominated in Nigerian currency, whereas previously he was paid in US dollars. The second is the targets he has been assigned per his new deal: he is expected to both qualify the Super Eagles for the 2022 World Cup and win the next Africa Cup of Nations.

From a fiscal policy point of view, the first is easy enough to rationalize. However, it is worth noting that, considering he is not getting a raise and going by the official rates of the Central Bank of Nigeria, he will actually earn less money than he used to.

While Rohr has always been keen to point out he does not do it for the money, there is still the matter of principle. The manner of it has not always been to the satisfaction of all Nigerians, but it is irrefutable that he has fulfilled every brief given him in his time in charge. Is he being punished for not exceeding expectation?

That segues neatly into the second point of discussion: the current set of expectations regarding on-field performance.

Nigeria has been at six of the last seven World Cups, and so can realistically expect to be present at a minimum. However, how does one take the charge to win the Africa Cup of Nations, especially as Pinnick designated it a sticking point – in his words "sacrosanct" and a goal in which the NFF would be "uncompromising" – in his announcement on social media just last week?

As the ongoing coronavirus debacle rages, the future of footballing competition remains murky, so much so that the timetable for the Africa Cup of Nations is up in the air still. If, as some stakeholders in the continental game have recommended, the tournament is moved all the way to 2022, an intriguing question arises.

If Nigeria were to, once again, reach the semi-final (or even get to the final) of the Afcon, but fail to win it, would the NFF be minded to terminate Rohr's contract with no more than a year to go before the commencement of the World Cup?

Pinnick attempted to walk the dog back in a Zoom press conference on Monday, stating that in the event that a fourth continental trophy isn't secured, the football administration would be willing to stay execution if they were satisfied with the "football artistry, technical competence and technical input from the bench."

These, however, are fairly nebulous and subjective measures, and do nothing to dispel the overall feeling of disquiet. It just seems like a snare has been laid for Rohr, one from which there can be no escape.

Take into account the unilateral manner in which former national team captain Joseph Yobo, sans coaching certification of any kind, was swept into a position within the backroom as a replacement for Imama Amapakabo, and if anything the foreboding only grows.

There has been little desire on the part of the NFF to mask the lack of respect toward Rohr. However, the German decided against taking his ball and going home. The romantic reading of it is that he has allowed heart to rule head, choosing to despise the shame in order to midwife the glory of the young and exciting crop of players he has amassed.

The truth, though, may be a lot more pragmatic: on the continent, there are not many higher-profile jobs and, just four years shy of his 70th, it simply is not worth it to start afresh somewhere else.

However, in reaching that decision, he has either chosen to back himself to successful hopscotch through the minefield now laid before him, or to trust in the good faith of the NFF. Either way, it is remarkably quixotic of a man of his experience: to bet against the house in this fashion is just not done. The only way to win is not to play.

In 'The Canterbury Tales', the inimitable Geoffrey Chaucer recommends a "full long spoon" when dining with a fiend. One hopes, for Rohr's sake, that he is at least an avid reader of English literature.
goal.com