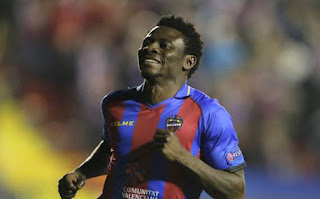 The six greatest Nigerians in La Liga are ranked according to their performances and laurels in this engaging write up.

Nigeria’s all-time top scorer joined Sporting Gijon in 1995 after an unsuccessful spell in Greece with Olympiacos, but the forward didn’t pull up trees in La Liga.

Already 32 at the time, Yekini was already past his prime and couldn’t deliver performances like he’d done previously with Portuguese side Vitoria de Setubal.

He played on 14 times for Los Rojiblancos, scoring three times, before departing for Swiss side Zurich where he enjoyed a decent-to-good yearlong spell.


#5 Samuel Okunowo
Few people will remember the right-back’s time with Barcelona because he seldom played for the Blaugrana despite being on the books for three seasons.

He did feature 21 times in all competitions for Barca in his maiden campaign which yielded a league title success. That La Liga triumph in 98/99 is why the defender isn’t bottom of this ranking, though, although the following two years were largely forgettable largely due to injuries.

Okunowo spent the following campaign on loan at Benfica but made just two appearances all season. He didn’t feature throughout 2000/01 and was let go by the Spanish giants afterwards.


#4 Finidi George
The wideman joined Real Betis after growing disillusioned with life under Louis van Gaal at Ajax and had an excellent first year in Andalusia, guiding the club to a sixth-place finish in the league.

In addition, they were beaten Copa Del Rey finalists against Barcelona in what marked a successful maiden campaign in Spain.

However, that was as good as it got for the flying winger in La Liga, with Betis failing to hit the heights of 1996/97 in subsequent seasons, which reached a nadir with relegation in 2000.

George played an extra year in Spain with Real Mallorca for whom he scored five goals in 31 appearances.

He returned in January 2004 for the second half of the campaign in what was his farewell season as a pro.

The 1994 Africa Cup of Nations winner is still fondly remembered at Betis and served as director of international football in the 2010s.


#3 Obafemi Martins
Despite playing for Levante for just one season, Martins finished the 2012/13 campaign as the team’s top scorer in all competitions with nine.

He netted seven La Liga strikes too, the highest in the team, and helped them to the Last 16 in the Europa League.

‘Obagoal’ scored twice in the Round of 32 4-0 aggregate success over Olympiacos, and can claim to have enjoyed a good year with the Granotas.


#2 Mutiu Adepoju
Adepoju not only helped Racing Santander secure La Liga promotion in the early 90s, he then thrived on their return to the top flight as they finished eighth in 93/94.

The attacking midfielder’s influence in Spain may have waned in subsequent years at Real Sociedad, still, his impact early doors at Los Verdiblancos made them regulars in the big time till their relegation in 2012.

The Afcon 1994 winner enjoyed an impressive start at Sociedad but couldn’t replicate the form he showed at Racing consistently.

Notwithstanding, his impressive stint at Racing remains hugely significant.


#1 Ikechukwu Uche
The forward enjoyed a storied career in Spain with Recreativo Huelva, Getafe and Villarreal, where he seemingly had a knack for scoring against giants Real Madrid.

Uche was instrumental in Recreativo’s promotion to La Liga in 2006, before following that up with an impressive 06/07, scoring eight league goals in 22 starts as the newcomers surprisingly finished eighth.

Two of those strikes were against Los Blancos with the first coming in a seismic 3-0 success at Santiago Bernabeu.

He secured a move to Getafe but wasn't a regular in either campaigns. Still, the most significant moment came in 07/08 when he scored the winner against table-topping Real in a tight 1-0 victory, before scoring yet again in a 3-1 triumph in 08/09.

Two serious injuries hindered his impact at Real Zaragoza between 2009 and 2011 but a move to Villarreal prompted a renaissance. Having netted 33 times in 85 matches for the Yellow Submarine, the Afcon 2013 winner left in 2015.

Uche’s impact at three teams makes him the most impressive Nigerian to have played in La Liga.
Posted by MAN ABOUT TOWN at 7:23 AM