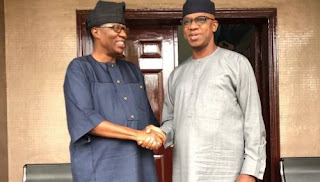 All eyes are on former governor  Gbenga Daniel in Ogun State at present.

This development is as
a result of a growing movement against incumbent governor Dapo Abiodun.

Insiders disclosed that members who defected from other political parties to helpDapo Abiodun and the All Progressives Congress win the last gubernatorial election are aggrieved.

''They are angry that Governor Abiodun has not rewarded their support' societynow.ng gathered.

sources disclosed that the ''aggrieved'' members have aligned forces and started mobilizing for Senator Lekan Mustapha to become the next governor of Ogun State - against the interest of governor Abiodun who is seeking another term in office.

Insiders claim the plotters are banking on ‘’claims that the governorship  slot should have swung to core Ijebu another to Remo, that enabled Abiodun and Daniel from the same zone represent the enlarged Ijebu nation back to back – in their bid to limit the incumbent governor to a single term in office.

Mustapha is from the core Ijebu while Gbenga Daniel and Dapo Abiodun are from Remo side of the extended Ijebu nation.

''Those leading the charge are fingered as members of the former governor Daniel political structure which defected from the People's Democratic Party (PDP) to the APC'' societynow.ng learned.

All eyes are on Daniel to see whether he would bail out Abiodun by calling his people to order or allow the situation to snowball into an embarrassment for the governor.

‘’I’ll love to be proved wrong, except he has changed OGD (Otunba Gbenga Daniel) commands huge respect from his followers and there are certain things his people would not get involved if he forbids it, except of course the rapport with his people has gravely changed’’ an insider pointed out.