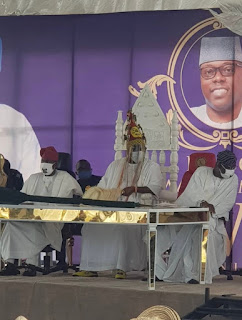 Governor of Lagos State, Babajide Sanwo-Olu has presented the staff of office to the new Oniru-Elect of Iruland, Oba Gbolahan Lawal.

The Staff of Office was presented to him by
the Governor at his Oniru palace on Sunday morning amid celebration.

The appointment of Prince Lawal as the Oniru-Elect, which takes immediate effect was made on Friday, June 5, during the State’s Executive Council meeting, where final ratification was made on his nomination.

Prince Gbolahan Lawal, succeeds late Oba Idowu Abiodun, former Oniru of Iruland, who passed on in year 2019 at the age of 82.

Gbolahan Wasiu Lawal born on July 24th 1970 to late Chief T. A. Lawal- Akapo, the Ojora of Lagos (1977-1993) and Olori M. A. Lawal-Akapo. Gbolahan is a Lagos Prince from the Ojora, Aromire, Shokun and Abisogun branch of Oniru Royal families of Lagos State.

Prince Lawal holds an Executive MSc in CITIES (LSE, Cities) from the London School of Economics and Political Science. He also obtained an MSc in Violence, Conflict and Development from the School of Oriental and African Studies [SOAS], University of London in 2008; a BSc Hons. in Botany from the University of Port-Harcourt in 1992 and a product of the famous St. Gregory’s College, Lagos.