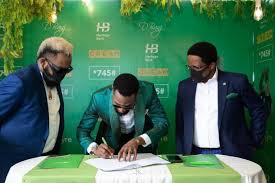 Top Nigerian singer Dapo Oyebanjo, also known as D’banj, is celebrating his 40th birthday with much excitement as he bagged a huge endorsement deal. The singer shared the good news on his Instagram page revealing it’s his biggest deal ever and best birthday gift.


He wrote; “HERITAGE BANK PARTNERSHIP ON MY BIRTHDAY…The biggest deal ever and the best birthday gift. Major shoutout to Heritage Bank Plc for this one. Osshey!! #40by40”

This is coming one week after a lady accused the Kokomaster of raping her in her hotel room in 2018.

One of his best known hits is ‘Oliver Twist’, which broke the charts in Africa and Uk when it was released in 2012.


kemiashefonlovehaven.com
Posted by MAN ABOUT TOWN at 1:35 PM