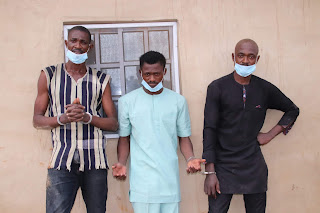 The Nigerian police’s Intelligence Response Unit have arrested three suspects – Johnson Emmanuel – 38yrs, Gideon Emmanuel – 31yrs and Success Emmanuel – 27yrs for the kidnap and killing of one Janet Nnenna Ogbonnaya on 14th May 2020 in Abuja.
The suspects, born by the same parents, all-male, and native of Isiekenesi, Ideato LGA of Imo State were arrested by the Police in their home town where they had taken refuge after committing the crime in Abuja, in order to evade police arrest.

Investigations that led to the arrest of the suspects is a sequel to complaints received from one Chinedu Ogbonnaya who alleged that his mother, Janet Nnenna Ogbonnaya, 55yrs, a native of Ozuitem in Bende LGA of Abia State had been kidnapped and a N5 million ransom demanded before she could be released.
The police in a statement said three suspects, who, in the course of interrogation, revealed that the victim had long been murdered and buried.
Further findings revealed that the victim, a widow, who had been a Facebook friend of the principal suspect – Johnson Emmanuel, was lured from her home in Gwagwalada to visit the suspect.
The suspect thereafter took advantage of the visit, served her yoghurt laced with drugs, and subsequently had her murdered.
After killing the victim, the suspect buried her remains in a septic tank and reached out to the family of the victim through her phone to demand ransom as a pre-condition for her release.
On Thursday, June 4, the suspects led a team of investigators alongside pathologists to a residence at Wumba District, Lokogoma, Abuja where the victim’s decomposing body was exhumed from a septic tank.
Investigations also revealed that the house where the deceased was killed and buried originally belonged to one of the suspects who hurriedly sold it off to a third party apparently to obliterate evidence.
Posted by MAN ABOUT TOWN at 1:53 PM