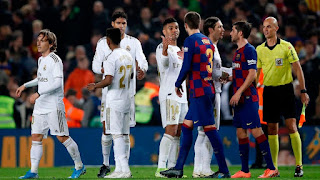 LaLiga stars Santi Cazorla, Clement Lenglet, and Nacho Fernandez believe the new five substitution rule will benefit players when the league resumes on Thursday.
The rule will mean increasing the number of substitutions allowed in a match from three to five, to allow players to build up their fitness after missing three months because of the pandemic.

Cazorla, Lenglet, and Nacho all agreed that the rule will help LaLiga regain the quality it had in matches before the coronavirus outbreak.
Posted by MAN ABOUT TOWN at 11:52 AM