My Husband Is Not Dead – Joke Silva 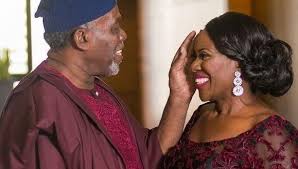 Nigerian actress Joke Silva has debunked the false rumours making the rounds that her husband Olu Jacobs is dead.

News that Jacobs is dead began making the rounds on social media yesterday but Silva has said that he is alive and well.

Speaking to journalists, the entertainer said she and her family find the news depressing.

She also made it known that Jacobs will turn a year older next month.

She further stated that the family had been getting calls from friends and associates who had wanted to know if the report was true.

She added that the birthday of Olu Jacobs is next month.

Shortly after the false report emerged online, a family friend to the couple, actress Lala Akindoju, debunked it saying the veteran actor is doing fine.

In a tweet, Akindoju warned Nigerians from peddling fake news as she said she spoke with Jacobs and he is “alive and well.”

Last year, Joke Silva expressed the opinion that she believes those who help sick actors shouldn’t publicise it.

According to her, she prays every day that she wouldn’t need to seek help from the public because of the humiliation other veterans have suffered.

Considered one of Nollywood’s most inspiring couple, Olu Jacobs and Joke Silva are very much celebrated in the Nigerian entertainment industry.

The entertainment couple have been praised for their contributions to the Nigerian film industry and promotion of the African heritage.

Guardianlife
Posted by MAN ABOUT TOWN at 8:12 AM