Two Killed As Nigerians And Cameroonians Fight Dirty In Deira, Dubai Over Price Of Beer 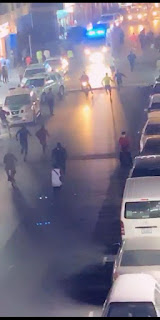 Two persons were reported killed early this week when groups of Cameroonian and Nigerian traders clashed in Deira, Dubai.
The two persons killed were Cameroonians according to witnesses while several were severely injured on both sides.
The fight broke after Cameroonian traders accused Nigerians of selling beers at cheaper rates, thereby drawing more customers to their stores.

Cameroon News Agency, however, reported that Cameroonians living in Deira, Dubai in the UAE, have assaulted some Nigerians in a revenge mission after a certain Tasso, Cameroonian, was almost murdered by Nigerians.
Sources say both communities have been having cold war in a place where they both sell beverages.