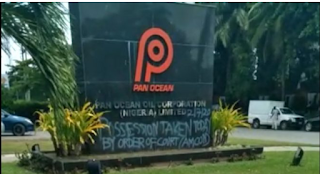 Former billionaire, Festus Fadeyi has gotten to that threshold in a man’s life when
brooding tragedy and its dark shadows can only be lightened by recalling great moments of the past.

Yes, there are men who gain from their wealth only the fear of losing it. But can the same be said of Festus Fadeyi ? He has just lost his company, Pan Ocean, several oil mining and oil prospecting licences exemplified by OML 147, 152 and 98 respectively.
It also includes property known as FF Towers, Plot 13/14 Ligali Ayorinde Avenue, Victoria Island, Lagos among several others to AMCON.
But despite his huge loss, Fadeyi must learn to find consolation in the fact that capitalism without loss, is like Christianity without hell. The greatest hazard of all is losing his mojo, and for a magnate of his stature, this can occur very quietly in the world, as if it were nothing at all. Until there is nothing left of his repute and beleaguered enterprise.
But the firm, in an application by its lawyer, Mr Oluwemimo Ogunde (SAN), urged Justice Liman to stay the execution of the takeover order pending the determination of a suit marked, FHC/L/CS/552/2020, which is also a subject of an appeal before the Court of Appeal in Lagos.
Ogunde described AMCON’s ex parte application leading to the takeover order as an abuse of court process, which he said the court rules frown upon.
He said, “The applicant has a prior claim or suit pending before Honourable Justice Liman in suit No. FHC/L/CS/552/2020, wherein the applicant is challenging the right of AMCON to the debt it is seeking to enforce or recover by the application herein challenged.
thecapital.ng
Posted by MAN ABOUT TOWN at 11:45 AM