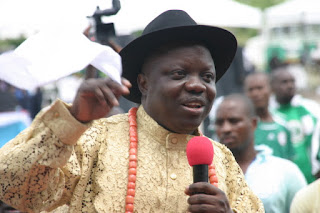 The eight year marriage of Nollywood actor and producer, Ruke Amata to Gilda has collapsed, thanks to the Governor of one of the South-South states of Nigeria. The wedlock, which has three children as fruits, was ruined after Blackberry messages between Gilda and the Governor, Gilda and an executive blue chip company (Kachi Onubogu) and a gubernatorial candidate in the South West was stumbled upon. The whistle blower reportedly forwarded the BB messages to Ruke Amata, who admitted being a recipient, and several others via e-mail, including a married Nollywood actress (Omoni Oboli) who was implicated as allegedly warming the bed of the South South governor and a jeweller. Gilda was also discovered to have 17-year-old son whom she hid from her husband. The boy was only discovered recently. These are the actors in this mind boggling escapade that stupefy…

The story that has unfolded in the home of actor, Ruke Amata and the famous Amata clan is the type found in the kind of movies you watch in Nollywood, unbelieveable and shocking. Are you married and into runs and have information on your phone that might nail you? Please check your phone and delete before you read further as this could be you!

Pretty Gilda Amata has a can of worms that has been opened, given away by her blackberry phone. According to insiders, ‘Someone got hold of Gilda’s phone and downloaded the content of her black berry chat and the shocking contents were love/sex chats between her and a top politician whose wife she calls ‘Aunty’, a serving Governor and several others. Gilda met the serving Governor through actress, Omoni Oboli and the rest is history’.

Read more »
Posted by MAN ABOUT TOWN at 3:35 AM No comments: