The couple that recorded the name of Nigeria on the chart of infamy in London, the Bello Williams are back in the country- and are drifting apart by the day!
Investigations conducted revealed that Dapo and Oriyomi of the famous scandal that hoodwinked the British social benefit system off millions of pounds- Dead Baby Certificate Scam- are back in the country thanks to a plea bargaining that resulted in forfeiture of properties. They did not spend all the years due in prison for the crime they were convicted for.
Insiders revealed that they sneaked into the country months back- and have maintained very low profile.
Their very popular place of enterprise, the hair care and weave on place, Essence is said to place play very minimal host to their presence.
The place of commerce situated in Ikeja Lagos is said to be managed by a Mr Muhammed on behalf of the couple.
The couple are said to shun all social interactions based on the notoriety that trailed the source of their wealth.
Informers further explained the chord of affection between the two appear to be peeling off by the day.
The inability to socialise and blames and counter blames on how the authorities got wind of their scam is said to be threatening their union.
Tales of domestic violence is said to have started colouring these disagreements.
According to a source ‘with their source of wealth gone, the affection appear to be on the way out as well’
Dapo and Oriyomi Bello Williams had conceived the perfect crime to rape the British Social Benefit system. Transforming the dead into the living, they had collected millions of pounds of social benefits on behalf of the dead. Oriyomi was caught while about to receive one of such payments after intensive investigations by the authorities concerned. Her husband, Dapo was arrested when he attended his wife’s court proceeding
Posted by MAN ABOUT TOWN at 6:24 AM No comments: 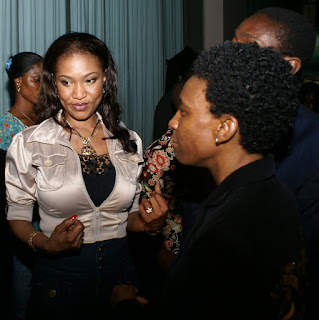 Barring any last minute change of plan this new quarter of year 2010 will witness the official launch of F.K Management, the artiste management firm of beautiful lady Funke Kuti.
Sources explained to Man About Town that the event is however planned to be a very low key affair.
‘Funke wants the noise about her company to come from whatever successes she achieves with the artiste on her label than from engaging in massive publicity drive about the firm herself’ a source explained.
F.K Management currently parade Rapper Weird M.C –Sola Idowu- as the major act on its label.
The dream of Funke is to see the company that came into the entertainment scene in the twilight of 2009 become the number one in Africa and a force to be reckoned with outside the continent.
Investigations conducted by Man About Town has it that the official launch will take place at a yet to be confirmed venue on Victoria Island Lagos.
It will parade a select group of stakeholders in the entertainment world- and handful of Funke’s friends in other fields including the media.
‘All invitees will come as a guest on hand to learn what the company is about in a very informal atmosphere’ a source hinted.
It is also expected that the occasion will show case other signings of F.K management aside Weird M.C.-And other members of the F.K Management crew.
Funke Kuti currently a key member of National sports lottery the promoters of Lotto Nigeria is said to be working hard at putting together a successful outing when the time comes.
Posted by MAN ABOUT TOWN at 10:41 PM No comments:

Wednesday March 24 2010- agents of Lagos state Goverment performed an astonishing feat.
The individuals acting on beahlf of the state administer by Governor Babatunde Fashola stormed the venue of the high class relaxation point and sealed off the whole building.
The reason behind this conduct was labelled refusal to offset growing debts with the Lagos State Government.
Insiders tagged the debt as tax related.
Eye witnesses explained that the agents of the Lagos State Government carried out the operation in a commando style.
They had stormed the Ikeja Lagos venue of the social activities place with armed policemen and screened off the entrance before pasting a notice that forbids any one from going in or out of the place until all issues with the state government are resolved.
It was a sorry sight to see members and their guest arrive later at the place- and forced to park by the road side in their posh cars lamenting what was tagged ‘ an unbecoming treatment’
Insiders explained efforts to see to the matter that resulted into the A-list fun place locked down resolved have reached advance stage at press time.Lagos Country club located along is a reputable members only place of fun and it parades an intimidating list of names topping the list of social register in it fold
Posted by MAN ABOUT TOWN at 10:07 PM No comments: 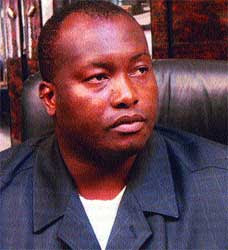 Despite recently celebrated feat of splashing millions of naira to get a whole street named after him in Magodo Estate,Lagos, there are clear indications that the money problems of money man and top player in the downstream sector, Ifeanyi Uba are far from over.
Investigations conducted by Man About Town revealed that one of his creditors financial institution, Spring bank are on his neck to get him to offset outstanding loans with the them.
Sources explained that the debt owed the bank by the Chief Executive Officer and Managing Director of Capital Oil is in excess of three hundred million naira.
Investigations conducted by Man About Town revealed that the loans were secured as part of moves to enhance the operations of Uba’s company with this and that business transaction.
He is said not to have been able to adhere to terms of payment.
Further investigations conducted by Man About Town revealed that the loan portfolio was part of those listed by the Central Bank of Nigeria in the last general bank audit that resulted in the sack of some bank headmen.
Insiders explained that the new Managing Director has directed the department charged with loan recovery to intensive efforts in getting back their money from debtors.
Ifeanyi Uba falls into the category of one of the big fishes the bank is targeting to refund huge debt.
The management of the bank are said to have been on his heels since Thursday March 25 2010.
Uba has been playing the game of not in town and unfulfilled promises of issuing cheques to take care of part of the bill.
However if the assertion of an insider is to be believed the money man’s days of grace are fast drawing to a close.
This is said to be based on a fresh directive within the establishment that tougher stance should be adopted with Uba and others in his category among the banks clientele base by those charged with effectively carrying out the debt recovery exercise.It is not yet clear what kind of approach the officials concerned will utilise in carrying out their job.
Posted by MAN ABOUT TOWN at 9:50 PM No comments: