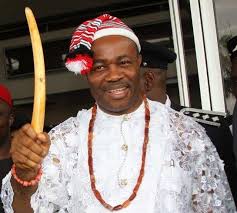 Governor of Akwa Ibom state, Godswill Akpabio is set to be investigated.

His staunch supporter and chairman of Essien Udim, Local Government area, Mr Nse Ntuen was arrested in the United States of America  on Friday August 16 2013 for smuggling $82,000.

He reportedly declared only $5.000 to immigration authorities- the remaining $77,000 was found in his bag on inspection.

Read more »
Posted by MAN ABOUT TOWN at 9:29 AM No comments: