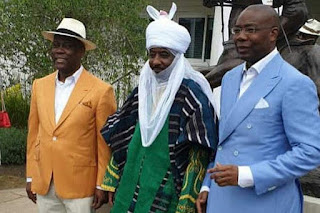 He is not the flash friend, the one everyone wants to copy and follow around. Rather, Aigboje Aig-Imoukhuede, the former MD/CEO of Access Bank Plc, is the
raw, loyal and vulnerable friend; the one who wears his heart on his sleeve and makes it okay for you to do the same. Thus, the deposition of Sanusi Lamido Sanusi as the Emir of Kano has rubbed off badly on him than anyone can imagine. So badly that he has reportedly accessible only to very close friends and family members.

Sanusi was deposed by the Kano State government Monday, March 9th, because of alleged insubordination, refusal to attend official meetings and breach of Kano Emirate Law. This was made known in a press statement signed by Secretary to the State Government, Usman Alhaji, positing, “The Emir of Kano is in total disrespect to lawful instructions from the office of the state governor and other lawful authorities including his persistent refusal to attend official meetings and programmes organised by the government without any lawful justification which amounts to total insubordination.” He was subsequently replaced by Aminu Ado Bayero and banished to Nasarrawa State.
A hugely popular monarch among Nigerians because of his sometimes anti-establishment stances and populist statements, Emir Sanusi reigned for only six years. He was, however, deemed by the northern oligarchs as too undiplomatic, strong-headed and a non-conformist for the sacred throne he occupied.
Sanusi’s shocking and sudden deposition has, however, left Nigerians divided. While many see him as a victim of his public pronouncements and do not pity him, his cheerleaders, like Aig, are reportedly ruing his deposition, averring that he is a victim of political power play.

According to sources close to Aig, he has been worst affected by the fate that has befallen his dear friend. And there are grounds for his deep sorrow.
When Aig’s Access Bank was going to acquire the failing (now defunct) Intercontinental Bank, Sanusi was Governor of the Central Bank of Nigeria. There were reports that Aig was indebted to Intercontinental bank then but because of his friendship with Sanusi, he literally got away with murder and was able to buy Intercontinental Bank. Access would become a top-five bank in Nigeria following its acquisition of Intercontinental Bank in 2012.
Beyond that, Aig and Sanusi’s friendship was so deep-seated that the deposed Emir was once quoted in an interview that he needed not buy a private jet when he has friends like Aig that made theirs available to him for use anytime he needed one.
Well, the deed has been done; the Emir has been deposed; Aig is sorrowing but like many friendships he holds dear to his heart, that with the Emir would survive the recent mishap.
thecapital.ng
Posted by MAN ABOUT TOWN at 4:01 AM