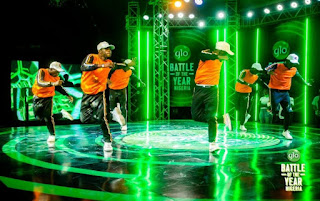 The Globacom-sponsored dance reality television show, Glo Battle of the Year Nigeria, neared a climax on Saturday night with the semifinals of the competition held at the Convention Centre, Eko Hotel, Lagos.

With the thrilling build-up to the event, the excitement in the hall was quite visible. The guests’ thirst for fun was richly quenched with the pre-live show having, among many exciting things, the quarterfinal dance battles for the Krumping, Locking, Popping, and Afro Dance categories. The Locking quarterfinals produced extra excitement as two wildcards- C Flyand Benedict, surprisingly made it to the semifinals. Benedict advanced to the final stage but was stopped by the eventual winner, Locking Mike.

The live show itself saw the culmination of the four dance category battles and also featured top flight comedy and music performances. The Popping battle had one of the fans favorite, Isikonko, emerge as the winner while Lil Conqueror won in the Krumping dance category.

The Afro dance finals were also the major entertainment point of the evening. Angela from Abuja amazed the crowd with her mastery of African dance steps. She was however beaten  by Izzy Twist in the finals.

Viewers at home were also able to enjoy the evening and follow all the action live on GloTV - Globacom’s video streaming app.

The semi finals show also featured performances by sensational music duo, Psquare, and rap artiste, Olamide, who dished out their hit tracks to the delight of the crowd. Also featuring a blend of comedy by Bovi and MC Forever, the event turned out to be a memorable night of Unlimited Entertainment.

During their hilarious comedy performances, Bovi and MC Forever commended Globacom for providing dancers the platform to make a career out of their passion.

The grand finale of the Glo Battle of the Year Nigeria dance competition will be held on 30th of April, 2022, and will feature the Bboy, Bgirls, and Breakdance Crew final dance battles. Super stars scheduled to perform at the event include Davido, Simi and Teni.