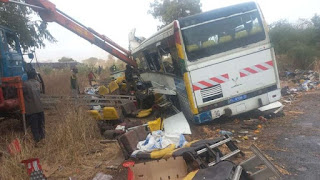 Thirty-eight people have died and around 80 been wounded in central Senegal after two buses collided in the early hours of Sunday (January 8) morning, local officials and President Macky Sall have said in statements.

The crash is one of the deadliest in the West African country's recent memory.

It took place near the town of Kaffrine about 137 miles southeast of the capital Dakar.

Sall said on Twitter that he was "profoundly saddened" by the accident.

He announced three days of mourning, starting on Monday (January 9).

According to the area's local prosecutor the accident occurred after a tire burst on one of the passenger buses, sending it into the path of another coming in the opposite direction.

Road accidents are common in Senegal where large trucks and buses, often decades old and overburdened, hurtle down two-lane highways pitted and rutted by overuse.