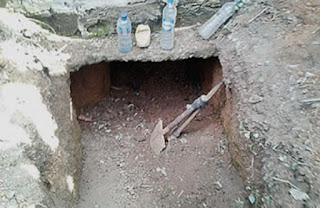 The police have discovered a 10-metre underground tunnel which was intended to reach the banking hall of
a new generation bank(name withheld) at Akure in Ondo State.

Though no arrests have been made, the tunnel that was dug at Ado-Owo Road behind the bank was only a few metres short of the banking hall.
Reacting to the discovery, the police said the plotters’ intent was to break into the bank through the tunnel and carry out their dastardly act.
Briefing newsmen the state Police Commissioner, Mike Ogbodu, said police discovered the tunnel during surveillance, adding that the suspected robbers plotted to rob the bank through it.
Items like diggers, cutlasses, hoes and shovels recovered at the scene, were shown to journalists by the police boss while conducting them round the bank premises.
Ogbodu, however, assured banks in the state of adequate security of their workers and customers.