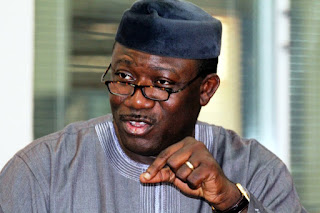 Nobody forgets Dr. Kayode Fayemi’s new mansion in GRA, Ikeja, Lagos,in a hurry. He recently bought the sprawling mansion and it cost him several millions of naira. In bid to make it worthy of his stature, the Minister of Solid Minerals Development, painstakingly remodeled it into an Eldorado of sort; replete with trappings essential to a life of glamour and allure.
Yes,
GRA, Ikeja is one of the most affluent areas in the Lagos State and Kayode’s mansion occupies a pride of place.
Very few people know that Fayemi has a weakness for good life. In fact, one would have to get very close to him to know that he never dithers from acquiring the finest luxury money can buy.
Too many people in the modern world-view luxury to be vainglorious, but to Fayemi, it is the essence of charmed life. It is the quality of his choices however, that distinguishes him from both the dreamy minion and hackneyed aristocrat.

Behind the gates of the impressive mansion, luxury saunters in a colourful garb. The interior depicts Kayode’s dreams of bliss; you could be forgiven for mistaking it for the fabled Atlantis. The panes of quaint decor, embroidered fabric and devices, ornaments the insides like the damasked wings of the pyralid.
Amid its enchanting premises, you could get lost, especially if you are a first time visitor. Recurrent callers at the mansion have been known to marvel and keel over in humility, in deference to its lavish treats.
Outside, the building is garlanded with arcs and flowers, and bunches of knot-grass. Kayode’s manor is a testament of class. No doubt.
However, the former governor of Ekiti State would be unable at acquire such luxury had he not taken the right steps in his pursuit and acquisition of money. He cultivated the money habit very early in life. He saw it as the perfect means for bribing his way through the inconveniences of life.
He pursued and acquired money in markedly different tradition from the ways of his peers. While too many of his peers, gained from their wealth only the fear of losing it, Fayemi gained from his wealth, comfort, contentment and a deep sense of purpose.
While he serves as Minister of the Federal Republic, Fayemi is working very hard and today he is reaping the fruit of his labour.
A visit to the mansion last weekend was quite an experience. In GRA, Fayemi’s palatial mansion sticks out like a gold crest, amid the houses in the area.