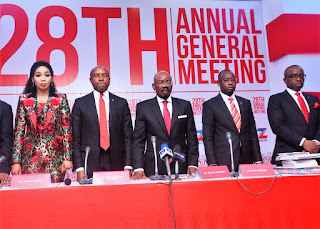 Also, in
demonstration of its commitment to its shareholders, the bank has announced a proposed final dividend pay-out of N2.50 per share, bringing the total dividend to N2.80 per share, representing a yield of 11.2 per cent.

According to the bank’s audited financial results for the 2018 financial year released in Lagos on Tuesday, this represents an increase of 16.6 percent over the N199 billion recorded for the same period in 2017. It is the highest so far published by any bank in the Nigerian Banking Industry in the current reporting period. Also, the results showed that profit after tax (PAT) witnessed an impressive growth of 11 per cent year-on-year to N193 billion from N174 billion.

This record profit before tax (PBT) was achieved through the Group’s optimisation of its cost of funds, cost-to-income ratio and cost of risk, ensuring that earnings per share strengthened by 11% to ₦6.15.

Despite the challenging macro-environment, the Group mitigated the knock-on effects through growth of its net interest income and operating income by 15% and 8% respectively as it was able to ensure improved cost efficiencies across the business. This focus on cost efficiencies is yielding tangible benefits as the Group recorded its lowest ever cost-to-income ratio at 49.3% from 52.8% in 2017.

The bank’s balance sheet remains shockproof as loan to deposit ratio, liquidity ratio and capital adequacy ratio were 44.2%, 72.0% and 25.0% respectively and all above the regulatory threshold.

Our risk-centric approach also ensured that cost of risk reduced significantly by 79% from 4.3% in the prior year to 0.9% in 2018.  This was reflected through the drop-off in impairment charges by 81% (₦80 billion) compared to 2017, re-affirming the Group’s enhanced asset quality. In the same breadth, coverage ratio increased by 34.2% from 143.4% to 192.4% over the same period, reflecting a prudent disposition to credit risk management. Cost of funds also moved in the positive direction, declining by 41% from 5.2% in 2017 to 3.1% for the year, supported by a 33% decrease in interest expense (₦72 billion) over the same period, demonstrating a robust treasury and liquidity management.

Customer deposits grew by 7% led by an increase of ₦109 billion in savings and an increase of N122bn in current accounts providing it with a platform to rebalance its deposits mix. In 2018, expensively purchased deposits were foregone in favour of cheaper and more stable deposits resulting in a reduction of expensive and shorter dated deposits by ₦110 billion. On the asset front, this increased by 6% to close the year at ₦6 trillion.

The Group’s efforts to deepen its roots in the retail segment have started yielding benefits.  This has resulted in a remarkable increase in the volume of transactions across various electronic platforms as well as significant customer acquisitions. This growth in transactions on its digital channels continues to support its retail push as fees from e-products increased by 44% over 2017 with retail deposit balances also growing by 25%.

Management’s outlook is positive for 2019, supported by a fairly stable inflation rate, converging foreign exchange market and near target oil production. The Group will continue its investment in the retail segment of the market to consolidate its leadership position in both the retail and corporate segments while it maintains its shock proof balance sheet.

Consistent with this superlative performance and in recognition of its track record of excellent performance,the bank was recently ranked as the Most Valuable Banking Brand in Nigeria in 2018 by The Banker Magazine. In similar fashion, Zenith Bank was recognized as the Best Corporate Governance Bank in Nigeria by The World Finance for the sixth time just as Ethical Boardroom, a Europe based Boardroom watchdog reaffirmed this recognition by naming the bank as the Best Bank in Corporate Governance in 2018.Recognition has also come the way of the bank as it was recently named as the Best Institution in Sustainability Reporting in Africa 2018 (SERAS Awards) and the Bank of the Year 2018 (BusinessDay).