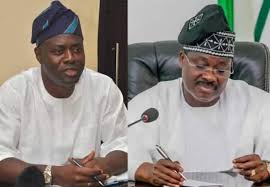 As predicted, the Oyo State government is making good the threat to scrutinize the activities  of ex governor Governor Abiola Ajimobi as the government vows to
summon road contractors of the immediate past administration  to site over what was termed ‘shoddy jobs’ across the State.

This was revealed by the State Commissioner for Works and Transport, Prof Raphael Afonja during an inspection tour of Taki and Odo-Oru-NEPA roads in Ogbomoso township on Wednesday evening.
Ogbomoso township road, Saki’s Poly to Ijale-Oda road and Oyo township roads were among road projects embarked upon by the Ajimobi-led administration but some of the projects were not completed.

Afonja expressed displeasure at what he called the state of the roads constructed by the previous administration which he said were already dilapidated under two years and less because they were not properly planned and constructed to stand the test of time.

“The roads were not designed properly for the purpose they are meant to serve and as such, the failure of the roads are of great concern to us, therefore, we will look for the contractors that did the road works and bring them back to site to complete the jobs or be made to refund government money back to its coffers.

“The inspection of the roads was to yield to calls made by people for government’s intervention on the roads, as a responsive government, we owe the people the responsibility to come and see things for ourselves and proffer possible solutions.

“We are assuring the people of Oyo State that any road construction project embarked upon by the Governor Seyi Makinde led administration will stand the test of time to serve as example to others.”

At the Palace of Soun of Ogbomoso, Oba Jimoh Oyewumi Ajagungbade III, where the government team made a courtesy call on the royal father, the king charged the federal and the State government on speedy completion of both the federal and the State roads in Ogbomoso axis, charging them to also construct roads of good standards to make life easy for road users for which he said they would be remembered for long after their tenure.

The visit was also extended to the palace of Onipetu of Ijeru land in Ogbomoso where Oba Sunday Oyediran commended the lofty ideas and programs of the Seyi Makinde-led administration, urging the present government not to rest its oars in order for the people to further enjoy the dividends of democracy.

The State governor had recently re-awarded the 65 kilometers Moniya-Iseyin road to KOPEK Engineering Company over what was referred to as the incompetence of the contractor handling the contract during the last administration.
Posted by MAN ABOUT TOWN at 8:33 AM