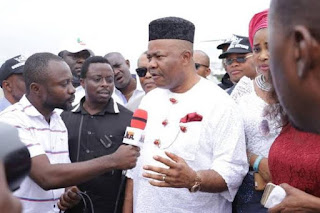 There is a fresh revelation on the reason Adams Oshiomhole, the National Chairman of the All Progressives Congress disgraced Minister Godswill Akpabio out of
the recent National Executive Council meeting of the ruling party.

Oshiomhole ordered security men to walk out Akpabio and all his supporters out of the venue of the meeting.
The Minister for Niger Delta Affairs and his crew were subsequently bundled out in the midst of protests.
https://societynow.ng/shame-how-oshiomhole-ordered-security-men-to-walk-akpabio-out-of-apc-nec-meeting/
Societynow.ng gathered that aside from the allegation that Akpabio mobilized for Edo state’s governor Godwin Obaseki in the bid to unseat Oshiomhole as the APC national chairman and the struggle for influence in the Niger Delta, particularly the NDDC ( Niger Delta Development Commission) , there is the added claim that the Minister is actually looking to replace Oshiomhole as APC chairman.Insiders disclosed that this played a huge role in the “public disgrace” that Oshiomhole meted out to Akpabio.
” Oshiomhole needed to portray Akpabio as a man without influence and clout within the APC, an opportunist riding on the wave of conflict and he found the perfect opportunity by throwing the minister and his crew out of the NEC meeting” a source stated.
And that he successful threw Akpabio and his team out of the NEC meeting with mere instructions to the security men is a damning telltale of the minister’s weight in the party.
Societynow.ng gathered that the plot was for  Governor Obaseki and his supporters to back Akpabio’s emergence as the new APC National Chairman if the plot against Oshiomhole had succeeded.
Posted by MAN ABOUT TOWN at 2:26 AM