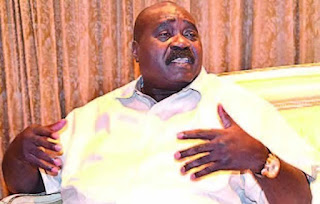 The Economic and Financial Crimes Commission (EFCC) has detained a former governor of Edo State, Lucky Igbinedion, over alleged criminal diversion of public funds to the tune of N1.6 billion.⁣⁣Premium Times reports that the ex-governor was being grilled by detectives at EFCC’s headquarters in Jabi, Abuja.⁣⁣Shortly after his exit as governor in 2007, Igbinedion was prosecuted by the EFCC and convicted of corruption.⁣⁣But the new investigation is based on fresh evidence that the former governor diverted a loan obtained by the Edo State government to settle the financial indebtedness of a company in which he was said to have an interest.⁣⁣The latest invitation was confirmed by the spokesman of the EFCC, Wilson Uwujaren who failed to give more details.⁣⁣Igbinedion, governor of Edo State from 1999 to 2007, was convicted for embezzling N2.9 billion belonging to the state in December 2008.⁣⁣Following a plea bargain agreement he entered into with the EFCC, the 191 charges were pruned down to only one count to which Igbinedion pleaded guilty.⁣⁣In exchange for his guilty plea, the Federal High Court in Enugu sentenced him to six months’ imprisonment with an option of N3.5 million fine.⁣
Posted by MAN ABOUT TOWN at 5:45 AM