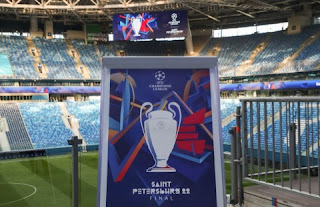 Uefa has confirmed that May’s Champions League final has been moved from St Petersburg to Paris in response to Russia’s military invasion of Ukraine.

European football’s governing body made the announcement after an extraordinary meeting of its executive committee on Friday. The game was scheduled to take place at the Gazprom Arena in Russia’s second-largest city on 28 May but will now be held at the Stade de France.

Uefa has also said that Ukraine’s and Russia’s national and club teams would play home games at neutral venues “until further notice” in its tournaments. Ukraine’s Football Association had pressed Uefa and Fifa to remove Russia and its club sides from all international competition.