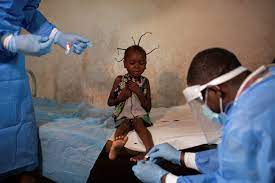 At a village clinic separated from the world by a tangle of meandering waterways and forests in central Congo, six-year-old Angelika Lifafu screams as nurses in protective suits pick at one of the hundreds of boils that trouble her delicate skin.

Her uncle, 12-year-old Lisungi Lifafu, sits at the foot of her bed, facing away from the sunlight that pours through the doorway and pains his swollen, weeping eyes. When nurses approach, he raises his chin, but cannot look up.

The children have monkeypox, a disease first detected in Congo 50 years ago, but cases of which have spiked in West and central Africa since 2019. The illness received little attention until this year, infecting 75,000 people.

Global health bodies have counted far fewer cases in Africa, where it is endemic, than in Europe and the United States.

During a six-day trip to the remote region of Tshopo this month, Reuters encountered about 20 monkeypox patients, including two who had died, whose cases were not recorded until reporters visited. None of them, including Angelika and Lisungi, had access to vaccines or anti-viral drugs.

In the West, only about 10 people have died of monkeypox this year, figures from the U.S. Centers for Disease Control and Prevention (CDC) show.

But in poorer African countries where many people do not have quick access to health facilities, or are not aware of the dangers, over 130 have died, almost all in Congo, according to the Africa CDC. A shortage of testing facilities and poor transport links makes tracing the virus nearly impossible, more than a dozen health workers said.

Without treatment, Angelika and Lisungi can only wait for the illness to run its course. Ahead of them lies a myriad of possible outcomes including recovery, blindness, or, as was the case with a family member in August, death.

Yalolia, a village of scattered mud huts 1,200 kilometres (750 miles) from the capital Kinshasa, where Angelika and Lisungi are patients, is reachable only by motorbike tracks that thread tunnel-like through the dense jungle, or by canoes carved from felled tree trunks. An old road connecting to nearby villages was cut off years ago when a series of wooden bridges collapsed.

The nurses caring for them seethe at the lack of treatments and care. Often, patients cannot afford medicines even for simple ailments, they said.

None of the cases were reported to authorities until Reuters visited Yalolia with a local health official called Theopiste Maloko. He only went to the village at Reuters' suggestion.

Without test results, they are now logged as suspected cases.

Tshopo, nearly as big as the United Kingdom, is heavily wooded and carved up by the Congo River and its many winding tributaries. Maloko's job is to track cases over an area spanning 5,000 square kilometres. But he cannot afford gasoline and has no means of transport.

When nurses took samples from sores on Angelika's leg and placed them in a polystyrene cool box strapped to the back of a motorbike, Maloko was sceptical.

To avoid spoiling, samples need to be kept cold and reach a laboratory within 48 hours, but they often do not, he said. The nearest testing lab is in Kinshasa; results take weeks or months.

Sometimes samples are not even taken.

The village of Yalanga is a day's journey from Yalolia by land and boat. Surrounded by jungle, it has no phone network or electricity. When the light fades, patients at the health centre lie in the dark on beds of hard bamboo.

The clinic, a small building with a tin roof and five rooms, has had three cases in recent months. To notify authorities of a new case, nurses must travel half a day to get phone reception.

Lituka Wenda Dety, a 41-year-old mother, thinks she got sick from eating infected bush meat. At the height of her illness in August, her throat was so sore she struggled to swallow her own saliva.

Round scars still dot Dety's body, and her bones ache. She is grieving. When she was ill in hospital, her six-month-old baby caught monkeypox and died. He is buried in a patch of sandy earth beside her mud brick home.

At the end of the day, Dety and her family gather around the small rectangular grave. She whispers prayers.

"We want there to be a vaccination campaign," she said.

"Going by what we have suffered, if many people catch this disease it would be a catastrophe."