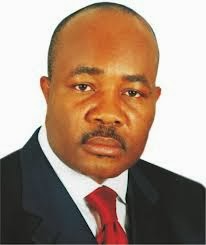 Governor of Akwa Ibom state, Godswill Akpabio has his hands full at the moment.

He is facing strengthening opposition over plot to en throne a successor of his choice. And moves to become a Senator after leaving office.


Those against his desires operate under the emblem of what is known as 'Voice of Akwa Ibom'.

The group is identified as 'a coalition of civil society groups in Akwa Ibom state'.

One of the major objectives of the group is labelled to  'resist imposition Akpabio's long term business associate, Mr Udom Emanuel on the people of the state'.

The group made it's position official with the issuance of a communiqué in Uyo, the AkwaIbom state capital at the end of their meeting on Tuesday December 4 2013.

The group which claims the restoration of justice and good governance in AkwaIbom State, especially in the 2015, as focus however, said, it would willingly throw their weight behind a well-known person who has paid in his dues in the politics of the state as their governor in 2015.

In a related development the 2015 senatorial ambition of Governor Godswilll Akpabio is labelled currently in 'jeopardy'.
Along with the group, various interests in the state are reportedly working to frustrate his resolve to take Ikot Ekpene Senatorial District Seat.

Those opposed to Akpabio’s ambition hinge their position on the insistence of the governor to adopt zoning in the allocation of the gubernatorial seat in the 2015 elections and not applying same standard to filling the senatorial seat.

According to informants, 'in spite of every good reason against his decision to foist his “business associate” of many years over the state as gubernatorial candidate in the 2015 elections,   he is just bent on continuing to rule the state by proxy, even while he wants to deny the Abak people who are entitled to the Senatorial slot of Ikot Ekpene of their right

'And stakeholders have vowed to resist him by all means and sensitising the grass root about his hidden agenda and I tell you, the awareness and opposition against it is growing by the day'
Posted by MAN ABOUT TOWN at 1:35 AM