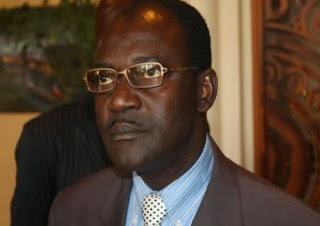 A topshot at the Nigerian Export Promotion Council has been arrested for allegedly raping a 7years old girl.


The accused is identified as Deputy Director, Joseph Benibo.

He is a part of the personnel department.

Here is a reproduction of the report that revealed the development

'Nigerian Export Promotion Council is in the news again for the bad reason. A deputy director in the federal government agency is accused of raping his neighbour’s 7 years old daughter.

Before now, it was the Executive Director/ Chief Executive Officer, Mr. David Ibrahim Adulugba (pictured). He was enmeshed in a fraud and nepotism scandals. The Benue-born administrator and pastor was accused of graft in the federal government agency and employing only people from his state of origin.
The latest is Mr. Boma Benibo, the deputy director (personnel), and the Akure Zonal Office Head of the Nigerian Export Promotion Council.
He was arrested for allegedly raping a seven-year-old girl.

'Mr. Benibo, 59, last week Tuesday, was said to have slept with the tot whose parents are his neighbours at 18, Kola Ogunmola Street, Ijapo Estate, Akure.
It was learnt that the little girl used to pay Mr. Benibo brief visit.
But her last Tuesday’s visit was too long for her mother, Mrs. Babadipe’s comfort and out of concern ran to Mr. Benibo’s apartment where she discovered her little daughter and the director together in a compromising situation.

Sources told orijoreporter that during interrogation of both, which drew the attention of other neighbours, the baby girl continued to point at her private part.
The girl’s body language suggested that a rape may have occurred and her father, Mr. Rotimi Babadipe, reported the matter at the Ijapo police station.
Contacted, the state Police image maker, Wole Ogodo, confirmed the incident.
Ogodo  said: “The police was going to do a medical test on the girl to ascertain if Benibo actually penetrated her.

“Yes, it is true, but we have a little problem to resolve, because the girl, on interrogation, said the man was fiddling with his private part and did not penetrate her.
“The police is trying to take her to the hospital so that a proper medical examination will be done to determine the fact of the matter.”'
Posted by MAN ABOUT TOWN at 2:57 AM