The marriage between Chief Kessington Adebukola Adebutu, the chairman of Premier Lotto Limited, and his youngest wife, Temitope Kofoworola is currently tottering on the brink of collapse. 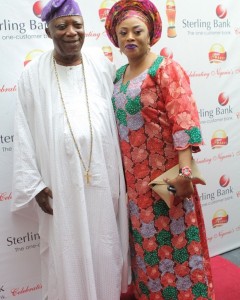 Except Temitope provokes God’s divine intervention, she may soon be sent out of her matrimonial home.


The ELITES gathered that Temitope drew her husband’s ire by playing abracadabra magic with his money. Sources disclosed that, Temitope was quite fond of pilfering money from her husband. It was not unusual for her to tap few thousands of dollars here or a couple of millions of naira there, from him. In most cases, the Ijebu-born billionaire, was reported to overlook cases of his missing money.

It is imperative to note that Temitope, who is in her late 30’s, is the only wife who lives with Pa Adebutu at his Ikoyi residence. Invariably, she had a modicum of access to his money, which is usually left scattered around his bedroom.
The beautiful society lady had even confided in her close friends that her husband was ‘selectively generous’ towards her.

Unfortunately, Temitope’s latest pilferage turned out to be her greatest undoing. The ELITES learnt that on this fateful day, Temitope packed a stack of money, amounting to N20million into a bag, and threw it down to the security guard to keep for her.

Apparently, Temitope had integrated the Maiguard into the ‘mild robbery’ operation, and had instructed him on where to take the money. But the Maiguard seemed to have a better idea of what to with the money, for he simply made a detour and went elsewhere to enjoy the loot.

As at the time of filing this report, his whereabout is still not known. 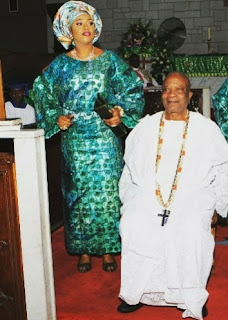 Sources disclosed to The ELITES that when Pa Adebutu discovered that someone had played an Anini on him, he didn’t waste time in confronting his youngest wife. Upon realizing that she had been caught, Temitope, was reported to have confessed to stealing the money.

Although, close family sources hinted that Temitope had been sent packing from her matrimonial home, the veracity of this claim remains in the realm of human conjecture.

It will be recalled that Chief Adebutu marked his 80th birthday anniversary, last October, in a most elaborate manner, which most people within the Nigerian social establishment are still talking about.Adebutu, the Asoju Oba of Lagos, married Temitope eleven years ago. A graduate of Olabisi Onabanjo University Ago-Iwoye, Temitope is mainly charged with taking care of her husband. And she never floundered in discharging this duty since she got married to the prominent philanthropist and became the apple of his eyes. Temitope is blessed with a captivating beauty, an attribute which was said to have magnetised the Ijebu chief the first time they met. The billionaire was so fond of Temitope that he refered to her as his Tonic, who kept him young at heart. Sadly though, on account of the recent, unsavory incident, the beautiful lady has since been robed with another sobriquet – Baba Ijebu’s Toxic.

In 2013, Temitope was delivered of a set of twin boys in Germany. The names of the Adebutu twins are Taiwo Adebola Oluwaseyi Akanbi and Kehinde Adebukunola Oluwaseun Akanji.