The shareholders of Zenith Bank Plc have commended the Board of Directors for an impressive financial year ended December 31, 2015, as they approved a total dividend of N56.5 billion for the period. 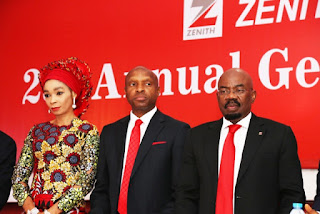 The Shareholders Group said despite the challenges in the environment and the harsh economy witnessed in the country, the bank posted an impressive result.


Speaking at the event, the National Coordinator of Independent Shareholders association of Nigeria, Mr. Sunny Nwosu, said the bank had done well in 2015 by giving shareholders dividend.

He encouraged the management to maintain its good corporate governance principles, which he said had positively impacted on the bank’s profitability.

Reviewing the 2015 financial year, the Chairman of Zenith Bank, Mr. Jim Ovia said: “The bank has remains committed to delivering superior returns to our shareholders as we declared an interim dividend of 25 kobo per share and a final dividend of N1.55, bringing the total dividend for the period to N180 as against N175 per share paid the previous year.”

He noted that owing to a number of domestic and external factors, 2015 was a very challenging year for operators in the banking industry.

Ovia, however said, in the face of a very challenging operating environment, Zenith Bank has maintained its culture of outstanding performance and industry leadership.

“As a bank, we are monitoring developments both in the domestic and global economy and applying pragmatism and dynamism, as appropriate,” he said.

Also the Managing Director of Zenith Bank, Mr. Peter Amangbo, added that the bank would continue to build a strong portfolio which is an important disposition for an effective and efficient model, saying this is expected to further impact business options in line with extant dynamics and influence prospects open to the bank.
Posted by MAN ABOUT TOWN at 8:43 AM