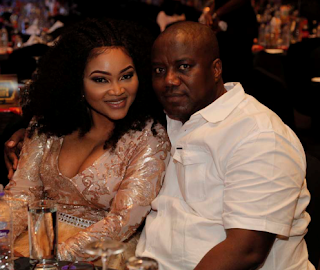 Lanre Gentry, the husband of Nollywood actress Mercy Aigbe, has been remanded in Ikoyi Prison for alleged wife battering.
Yewande Aje-Afunwa, presiding on Tuesday at Ogba chief magistrate’s court in Lagos, ordered Gentry to remain in prison custody until
his bail is perfected.

Gentry 52, was granted bail in the sum of N500,000 with two sureties in the like sum. The sureties must show proof of tax payment and own houses in Lagos with title documents.
The police charged Gentry with three counts of breach of public peace, assault and causing grievous bodily harm on his wife. He pleaded not guilty.
Police prosecutor, N. Peter, told the court that Gentry on April 17, conducted himself in a manner likely to cause a breach of peace by constituting nuisance and behaving in a disorderly manner in a public place.
Peter further said Gentry unlawfully assaulted his wife by beating her with physical blows all over her body.
Gentry was further alleged to have caused Mercy Aigbe grievous bodily harm after giving her a blow on the nose, with blood gushing out.
Peter said the offence committed by Gentry was contrary to and punishable under sections 157 (f), 168 (a) and 171 of the Criminal Law No II, Vol. 44 Laws of Lagos State of Nigeria 2011.
The case has been adjourned till May 12 for trial.

thecable
Posted by MAN ABOUT TOWN at 1:08 AM