The End!..Why So Many Beautiful Ladies And Gentlemen Will Miss Billionaire Taxman, Tunde Fowler 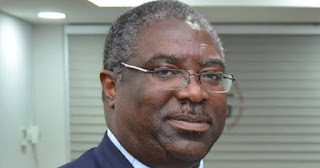 In a split second, one’s whole life can change. Nobody understands this at the moment better than Babatunde Fowler, hitherto, the executive chairman of the Federal Inland Revenue Service, FIRS.
Earlier today, Fowler was replaced as the helmsman at the FIRS despite endless efforts and consultations by him and his promoters to be retained on the
job. He was replaced by a tax consultant, Muhammad M. Nami. Garba Shehu, Senior Special Assistant to the President on Media and Public Affairs, announced that President Muhammadu Buhari has approved the composition of a new board for the FIRS, subject to Senate confirmation.

Fowler was appointed as the FIRS chairman on August 20, 2015, but confirmed by the Senate on December 9, 2015.
If the thoroughbred Lagosian and his legion of supporters and associates thought that by some divine intervention he would get a second term at the FIRS, that hope was dashed and quashed today, thus, bringing to an end a very colourful chapter in Fowler’s life. His impotence did not catch up with him until the very end; when it did, Fowler had been demystified. As you read, the vainglory by which he prospered has been dumbed to a name.
Until last Friday, he was the swashbuckling, deep-pocket boss of one of Nigeria’s money-spinning agencies. Yes, he was the cock of the walk, the ruler of the roost and the major domo in the pantheon of deep pockets. He commanded the attention and adulation of men and women wherever he went or his name was mentioned even for just the effect; not just on account of his bulky, well-fed frame but because of his generousity to men and women who crossed his path.
With a stroke of the pen, Fowler has made many young ladies and dudes car and home owners in Lagos and Abuja and everywhere else. He was the very dependable big daddy and role model many young ladies never had. Those who were lucky to find his favour have wondrous stories to tell as their lives never remained the same. In his early 60s, Fowler finds contentment and comfort in the company of nubile youngsters who waited on him body and soul whether on land or water. He has a beach house on the Lagos coastline, Ilashe, where he satisfies his hedonistic pleasures.
Oh, Fowler rocks!
If every end truly were a new beginning, then, the end might have come for the national acclaim and influence, hedonism and limitless flow of money that he enjoyed for the past four years. Except there is a change in the political scene, Fowler may have begun a new journey into anonymity, endless appearances at the EFCC and desertion by those who used to swear by his name and those who worshipped the ground he trod.
Before his ouster, he was still being investigated by the Economic and Financial Crimes Commission, EFCC, as part of investigations into the sleaze in the agency. In May 2019, 40 senior and junior management staff of the FIRS, including the Director of Finance, Mr. M. Auta, were arrested for an alleged N2.1billion scam purportedly siphoned through the alleged payment of Duty Tour Allowances (DTA) to the staff.
Some of the suspects were reportedly paid as much as N101million among other eye-watering figures. The international passports of 10 of the officials were seized to restrict their movement to the country pending investigation. The EFCC said the officials, many of who are trusted and loyal aides of Fowler, were arrested for “alleged inflation of Duty Tour Allowances, humongous payments to staff, diversion of funds and outright stealing of public funds.” It added that there was information that some senior management officials were using their subordinates to siphon funds from the accounts of the FIRS in the guise of travelling allowances. The practice was that the funds were paid to the staff and after little deductions; the bulk of the money was transferred to the senior management staff.
The EFCC stated, “As civil servants, some of the suspects were paid as much as N101million, N97million, N89million, N84million, N65million, N52million and N46million as Duty Tour Allowances. There is no way a civil servant can earn about N101million in his or her 35 years in service. In some instances, some staff claimed to have been in Lagos, Sokoto, Calabar on the same day and collected DTA. Most of the DTA allowances were not used for official purposes or public service. This is a case of stealing and money laundering.”

thecapital.ng
Posted by MAN ABOUT TOWN at 12:29 PM