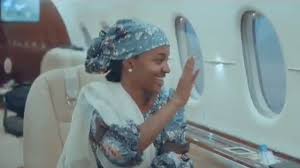 What right do the children of the president have to use the presidential plane fleet? Some Nigerians think they do not deserve the privilege as controversy rages over the use of a presidential plane by Hanan,a daughter of President Muhammadu Buhari. Hanan was
pictured disembarking from a presidential plane in Bauchi on Thursday to attend a Durbar in the city at the invitation of the Emir of Bauchi, Rilwanu Adamu. She was a special guest of honour at the event. The Presidency disagrees with critics that she has no right to the plane.

Many Nigerians have taken to the social media, questioning Hanan’s right to the plane to attend a private event. The opposition Peoples Democratic Party (PDP) yesterday accused   President Muhammadu Buhari of directly abusing his office and exhibiting “the worst form of corruption” by detailing the officially restricted presidential jet to fly his daughter to Bauchi state. The durbar,according to reports, was specially organised to give Hanan the opportunity to take photographs of the event  and other interesting sites in the state.
She recently graduated with a first-class degree in photography from a British university. Presidential spokesman, Garba Shehu confimed that “a member of the First Family was flown to Bauchi yesterday on a mission duly authorized.” He added: “It wasn’t an impromptu or improper trip because it followed normal procedure. The Presidency informed the National Security Adviser of the mission who, in turn, informed the Commander of the Presidential Air Fleet. The normal practice in existence for a long time is that the Presidential Air fleet is available to the President and the first family and four others. These four are the Vice President, the Senate President the Speaker and any other person(s) authorised by the President.”
The PDP dismissed Hanan’s use of the presidential plane as “provocative, condemnable, completely improper and an unpardonable slap on the sensibility of millions of Nigerians, particularly, the youths, who look up to the president for integrity, uprightness and respect for rules.” National Publicity Secretary of the party, Kola Ologbondiyan, said in a statement in Abuja that the development underlined the recklessness that pervades the Buhari Presidency and “the indefensible annexation of our national assets and resources for illegal private use.”
Continuing, Ologbondiyan said: “It is even most appalling that instead of apologizing to Nigerians, the Buhari Presidency, in its arrogance, is resorting to falsehood and trying to justify the inexcusable. “Our party holds that Mr. President should apologize for approving that her daughter uses the Presidential jet just for the purpose of allegedly taking photographs in a Durbar event in Bauchi state. Perhaps, the Buhari Presidency forgot that it is public knowledge that the Presidential fleet can only be authorized for use by the President, the First Lady, Vice President, Senate President, Speaker of the House of Representatives, the Chief Justice of Nigeria, former Presidents, Presidential delegation and no one else.
“Moreover, the rules do not grant the President any powers to transfer any paraphernalia of office or privileges of his position to any of his children. The Presidency’s defence is, therefore, a direct spat on millions of Nigerians who cannot freely ply our highways because Mr. President and his party the APC, have failed to fix and rid our roads of kidnappers and bandits, who have practically taken over major routes under their despicable watch. Nigerians could recall how President Buhari heavily accused and criticized previous administrations of voting and wasting huge resources to maintain the Presidential fleet and promised to sell off most of the planes to save cost.