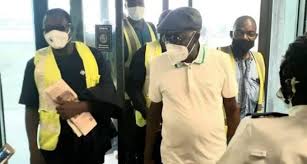 National leader of the APC, Bola Tinubu, former governor of Lagos state, has arrived in Nigeria after a month absence. Tinubu returned to the country on Sunday, about a month after he left.

He was sighted at the Murtala Muhammed International Airport (MMIA), Lagos, in company of some of his aides.

There are reports that the national leader of the All Progressives Congress (APC) would contest the 2023 presidential election.

Although Tinubu has not publicly declared his interest in the highest office in the land, his allies and associates have started campaigning.