Inside Details Of Drama Thrown Up By Nora Johnson, Woman In Viral Video Of EFCC Carrying Out Court Order 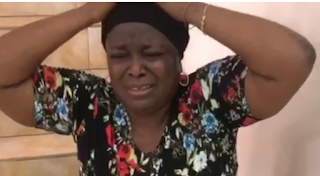 Behind the scenes story of the video of the woman mentioning the name of one of the nation’s recognized employers of labor as the Economic and Financial Crimes Commission (EFCC) sought to execute a court order as surfaced.

The mysterious woman has been identified

She is said to be a Sierra Leonean who is facing prosecution for alleged conducts at her former place of employment.

The business where she was accused of inflating air ticket fares and over-invoicing on purchases of vehicles reportedly to the tune of over one billion Naira (N1billion) is owned by Mike Adenuga, the recluse billionaire touching lives across borders.

But the EFCC is prosecuting her and others linked to the matter for “illegitimate wealth” societynow.ng gathered.

The others listed as respondents in the case are Babajide Aremu Johnson, Olabose Ibrahim Falobi, Steve Nnamdi Izebu, Steve Ibem and Bakoliza Limited.

The information available to societynow.ng revealed that in the name of the Federal Government of Nigeria the EFCC dragged Ms Johnson to court based on the finding yielded by the investigation into allegations against her.

The court by the ruling of Justice A.M Liman on February 16, 2021, granted an interim forfeiture order on some of the properties and the bank accounts of Ms Johnson and others involved.

The affected persons – including Ms Johnson – however, tried to block the interim forfeiture order with a counter-court case.

They reportedly sought an order to discharge the interim forfeiture of assets, an order discharging the final forfeiture order, and any other orders as deemed fit by the court societynow.ng gathered.

The July 14, 2021 ruling of Justice Allagoa on their applications, however, dashed their expectations.

Justice Allagoa ruled that the motion of Ms. Olumide and the other respondents dated March 12, 2021, be set aside

The judgment by Justice Allagoa stated “That the order of Justice Liman stands in all its ramifications” and “That the Economic and Financial Crimes Commission (EFCC) are entitled to take possession of all that property subject of the Order of my Lord A.M. Liman on the 16th day of February 2021.

Societynow.ng gathered that it was in the course of executing the court order by EFCC that Ms Johnson threw up the drama she serial mentioned the name of Adenuga in what is now being branded “emotional blackmail”.