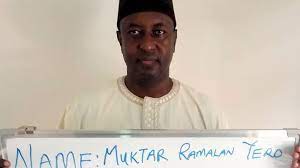 Yero is being prosecuted by the EFCC alongside Nuhu Somo Wya (a former Minister), Ishaq Hamsa (former Secretary to Kaduna State Government) and Abubakar Gaiya Haruna (former Chairman of People’s Democratic Party, PDP in the state) for their alleged involvement in the sharing of Seven Hundred Million Naira (N700, 000,000.00) provided by former Minister of Petroleum Resources Diezani Alison-Madueke to influence the outcome of the 2015 presidential election.

Their re-arraignment today followed the transfer of the former trial judge, Justice Zainab B. Abubakar to another division of the Federal High Court.

When the case was mentioned, the prosecuting counsel, Nasiru Salele told the Court that the case was for re-arraignment of the defendants and urged the court to ask them to take their pleas.

The defence counsel did not object.

The eight count charges were read to the defendants and they all pleaded ‘not guilty’.

In view of their pleas, the prosecuting counsel asked the court to fix a date for trial.

But the defence counsel drew the attention of the court to the previous bail granted the defendants, asking that the status quo be sustained which the prosecution counsel did not oppose.

The court consequently adopted the bail earlier granted the defendants and adjourned till October 13, 2021 for commencement of trial.