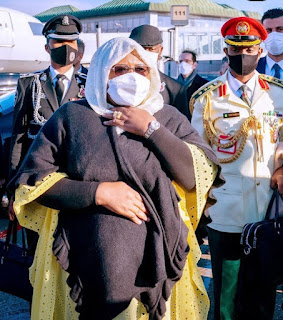 Photos of Aisha have been in circulation on social media in connection with insinuations that she’s with a child.

The photos had surfaced after the first lady landed in Abuja on her return from the Turkey-Africa summit which she had attended with President Muhammadu Buhari.

Following the development, rumours claimed that she was suffering an ailment while other social media users alluded to pregnancy.

But in a chat with BBC Pidgin, Haruna denied the claims while stating that the first lady is “perfectly okay”.

“I can assure you 100 percent that our first lady is perfectly okay. She is neither sick nor pregnant as some reports claim,” he said.

“Some of these reports are from mischief makers who don’t mean well. You know, nowadays, people can tamper with photos.”

Buhari got married to Aisha, 50, in December 1989. The union has so far been blessed with five children.

In 2019, the couple celebrated their 30th wedding anniversary.