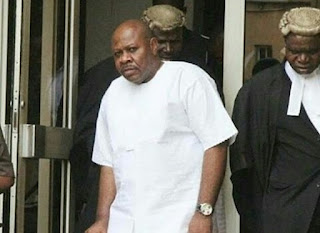 Justice Josephine Oyefeso of the State High Court sitting in Ajah, Lagos has adjourned till February 15, 2022 further hearing in the trial of Fred Ajudua for an alleged $8.4million fraud.

The adjournment followed a claim by the defence that Ajudua had tested positive for the Coronavirus Disease, COVID-19 on December 3, 2021.

The Economic and Financial Crimes Commission, EFCC, is prosecuting Ajudua for allegedly defrauding a former Chief of Army Staff, Ishaya Bamaiyi, of $8.4million, while they were both in Kirikiri Prison, Lagos in 2004 for different offences.

Ajudua, alongside his accomplices, had allegedly approached Bamaiyi and convinced him that he could hire the legal services of Chief Afe Babalola, SAN, at the cost of $8.4m to help secure his release.

At the sitting on Monday, December 6, a counsel from the Chambers of Olalekan Ojo, SAN, who appeared for the defendant, claimed that Ajudua had contracted COVID-19.

He added that Ajudua had undergone several tests since January, the latest being the one done on December 3, 2021, which turned out to be positive.

Consequently, the prosecution counsel , S.K. Atteh applied to the Court that the documents, which the counsel claimed were the results of the COVID tests, be filed in the Court and served on the prosecution.

"The prosecution will subsequently apply under Section 235 (4) of the Lagos State Administration of Criminal Justice (Amendment) Law 2021 for the defendant to be tried in absentia, if he still fails to appear in Court," Atteh added.

Justice Oyefeso, thereafter, ordered the defendant to file an affidavit in Court attaching the said documents, which he claimed were the results of the said COVID tests, and also serve them on the prosecution.

The Court also ordered that the defendant should undergo another test at the Nigerian Centre for Disease Control, NCDC, Yaba on December 6, 2021 and file the result in Court within 48 hours.

The case was adjourned till February 15, 2022 for continuation of trial.