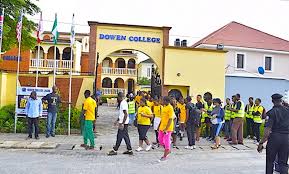 The Lagos State Government on Friday ordered the indefinite closure of Dowen College, Lekki, pending the outcome of an investigation into the death of Master Sylvester Oromoni Jnr, a student of the school.

This was contained in a statement signed by the Assistant Director, Public Affairs, of the Lagos State Ministry of Education, Ganiu Lawal.

The statement read, “The Lagos State Government has ordered the indefinite closure of Dowen College, Lekki, pending the outcome of an investigation into the death of Sylvester Oromoni Jnr, a student of the school.

“Commissioner for Education Mrs. Folasade Adefisayo announced the closure after a meeting with the School Management and Staff.

“The Commissioner called for calm, saying no effort will be spared in getting to the root of the incident.”

The death of the 12-year-old student of the college, Oromoni Jnr., had sparked various reactions from celebrities and Nigerians alike.

Reports had emerged that Oromoni was bullied and beaten by fellow students. The supposed injuries from the beating led to his death, according to a Twitter user with the handle @perrisonoromoni, who claimed to be the boy’s cousin.

However, in a statement on Wednesday, the school denied all allegations stating that Oromoni was neither bullied nor beaten but only complained of hip pain after playing football.

The child’s father, who bears the same name as the student, stated that contrary to what Dowen College had said in the statement, the family friend who they sent to pick up Oromoni Jnr. from the school described a totally different situation.

The bereaved father stated that his son was bullied and beaten to stupor as he said, “The next day, we sent a family friend to help pick up our son since he was the only person in Lagos and take him to the hospital. When he got there, he panicked, pointing out that he doubts it’s a football injury as the school claimed.”

Meanwhile, Dowen College, in an email sent to parents early Friday morning, stated that students should not come to school on Friday, 3rd December and Monday, 6th December because of the incident.