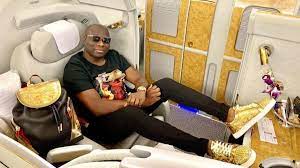 A Special Offences Court, Ikeja, on Wednesday, issued a bench warrant for the arrest of suspected internet fraudster Ismaila Mustapha known as Mompha.⁣⁣Justice Mojisola Dada ordered his arrest for failing to appear in court on two scheduled dates for his trial.⁣⁣The Economic and Financial Crimes Commission (EFCC) is prosecuting Mompha on an 8-count charge of conspiracy and money laundering of over N6 billion. He is being prosecuted alongside his company, Ismalob Global Investment Limited.⁣⁣Mompha was arrested on January 10 by the EFCC but was arraigned and granted bail.⁣⁣His matter could not proceed due to his absence at the last adjourned date.⁣⁣The EFCC lead counsel, Rotimi Oyedepo, asked the court for another stand down, but the judge returned the request.⁣⁣Oyedepo told the court that the development shocked him.⁣⁣He urged the court to allow the defence to speak to his client and put him on the speaker to confirm the position of things.⁣
Guardian
Posted by MAN ABOUT TOWN at 9:40 AM