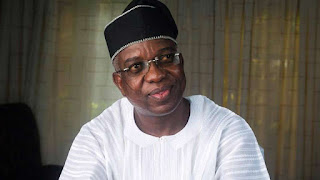 The deputy governor of Oyo state Rauf Olaniyan has defected from the People Democratic Party (PDP) to the All Progressives Congress (APC).

His decision to cross-carpet ended weeks of speculation about the deputy governor’s membership in the Peoples Democratic Party (PDP).

Mr. Olaniyan said his defection was informed by calls from his supporters who were unhappy with how he has been excluded from the affairs of the PDP and the state.