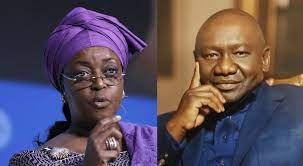 Fresh papers from the Crown Court sitting in Southwark, London, have detailed how Aiteo Group President, Mr. Benedict Peters, made an estimated sum of US$292,157,683.65 in benefits from allegedly corruptly obtained oil contracts over a four-year period.

The contracts were said to be part of the multi-billion dollars scam linked to former minister of Petroleum Resources, Mrs. Diezani Alison-Madueke in which companies linked to Peters and others were awarded juicy offshore contracts in lieu of which they paid out bribes in cash, properties and luxury goods to the fugitive minister.

Peters who is named as the arrowhead in the sleazy oil deals with Alison-Madueke was also said to have paid out not less than £10 million to Alison-Madueke over a period of three years from 2011 to 2014. Documents seen by our reporter said the money was spent “by way of high value goods, property purchases, payment of school fees and payment to the charity of Alison-Madueke’s brother.”

The document listed 12 items with dates of payment, value of item and details for the payment.

Other payments captured in the court papers include the payment of $400,000 on June 29, 2012 from Sullam Voe to Alison-Madueke’s husband for the charter of a tug.

The court papers also exposed a curious involvement of a church in the three-year running scandal. For example, there was the payment of the sum of £1,000,028.30 from Peters to The Christian Way of Life Churches as a “sacrificial seed” on April 5, 2012 which was a Thursday.

It would be recalled that UK authorities commenced investigations into the messy oil deals of Peters following a request for Mutual Legal Assistance dated 17th June, 2016 from Abubakar Malami SAN, Attorney General of the Federation and Minister of Justice which was received by the Crown Prosecution Service.

The letter was received by the UK Central Authority, UKCA, on 4th July, 2016. The letter sighted by our reporter, clearly stated that the Economic and Financial Crimes Commission, EFCC, in Abuja was conducting an investigation against Diezani Kogbeni Alison Madueke, Benedict Peters, and others for offences of bribery and laundering the Proceeds of Crime.

The agents of Diezani were beneficiaries, remotely and directly, of the massive crude oil lifting scandal that signposted her era as minister, according to allegations listed in several depositions by witnesses.

Findings by investigators showed a schematic pattern of money laundering using property markets in US, UK and Nigeria. A particular pattern that ran through many of the illicit acquisitions of property by Peters and other agents of Diezani was how they discretely passed the ownership of the properties from one person to another in their bid to mask Diezani as the real owners of the luxury properties.