Why Ambode Is Trending 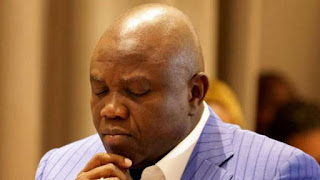 Akinwunmi Ambode, the only governor limited to a single term since the political family of Asiwaju Bola Ahmed Tinubu took the reins of the affairs of Lagos state is back on the lips of many.

Since the 59year old left office in the

landslide defeat to retain the All Progressives Congress gubernatorial ticket for a second term, the talks that have kept him in the public consciousness is the plan to stage a return to political prominence in Lagos State.

What is playing out with a variation added to it.

The revelation is pushed across social media platforms by the “Obidients”, the passionate supporters of LP Presidential candidate Peter Obi.

“Obidients” who are voracious in their support for Peter Obi and the Labour Party across social media platforms label “Awamawi Ifagbemi”, the LP gubernatorial candidate in Lagos State recognized by as the Independent Electoral Commission (INEC) as a “placeholder”.

“Placeholder” is a status created to beat INEC’s deadline for the submission of the names of candidates for an election before a consensus is reached by political parties.

“The major issue with using placeholder strategy to propose Ambode as the LP gubernatorial candidate is that there is another electoral rule that forbids those that did not partake in a party’s primary from emerging candidates for an elective position. Those who have used the placeholder strategy employed it to determine their deputies, a position that does not require a primary election.” SocietyNow.Ng learned.

The son of Festus Akinwale Ambode and Christianah Oluleye Ambode is known to be a member of the APC – and many insist he remains a member – when political parties, including the LP held gubernatorial primaries.

“In fact Ambode was touted as an aspirant in the APC gubernatorial primary that gave Sano-Olu a second term ticket” Sources claim.

Sanwo-Olu won the APC gubernatorial primary that limited Ambode to a single term as Governor.

Ambode became a sidelined member of the APC in Lagos state over the alleged manner he ran his administration and interfered in the affairs of the party when he was Governor.