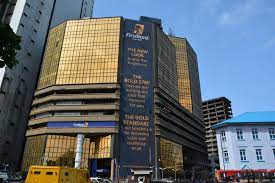 An Abuja division of the National Industrial Court of Nigeria (NICN) has ordered First Bank Plc, to pay a total sum of N23,307,134.57 million, to one of its former staff, for wrongful and unlawful dismissal from work.

The court presided by Justice Edith N. Agbakoba, awarded the judgment sum against First Bank Plc, while delivering judgment in a suit marked NICN/ABJ/229/2015, filed by one Gbenga Giwa, a former employee of the bank who was unjustly dismissed from the bank over controversial N60 million fraud.

Giwa, who worked last with the bank as Deputy Manager (Construction/Infrastructures Desk), before his unjust dismissal, had approached the court through his counsel, Bola Aidi, for the following reliefs; “a declaration that the purported letter of dismissal dated May 4, 2015, served on the claimant is null, void and of no effect whatsoever.

“A declaration that his letter of resignation dated September 2, 2014 served on the defendant is valid and subsisting.

“An order mandating First Bank, to pay all his entitlements for service with the bank for over 20 years to wit: his gratuity; N6. 3 million; Total Emolument: salary N17, 290, million, representing salary for 1 year totaling: N23,590 million, with immediate effect.

“An order mandating the First Bank to pay him one year unpaid salary and emolument while he remains in the employment of the bank from June 28, 2013 to September 2, 2014 respectively before tendering his resignation, amounting to a total of N23,007,134.57 million.

“An order of perpetual injunction restraining the bank from using; the Police, SSS, Army, Navy, Air Force and any other Security Agencies to arrest, detain, harass, intimidate or oppress the him in any manner whatsoever in respect of any loan connected with his employment.

“An order for payment of the sum of N5 million, being specific damage for withholding his entitlements, rights and benefits contrary to the provisions of the Employee Handbook of the Defendant since 2014 till date. And the sum of N50 million, as general damages, for the physical, psychological and emotional trauma visited on him through the actions of the bank.

But, First Bank Plc in a preliminary objections and counterclaims to the suit, filed by its counsel, Ayodeji Ademola, asked the court for “a declaration that it’s letter dated May 4, 2015, summarily dismissing the claimant from her employment, is valid and that the Claimant’s purported resignation via a letter dated September 2, 2014, while under suspension and undergoing investigation is null and void having contravened the terms of his employment.

“A declaration that the Claimant was properly dismissed in line with the Employee Handbook of the Counter Claimant and the claimant is not entitled to any benefit.

“A declaration that the fraudulent and unauthorized debit transfers of N60 million, in two tranches of N30 million, each from the account of Webb Fontaine Limited. i.e. account no. 200739563 (Hong Kong), to the account of Eksato Engineering Services Limited (account no. 2011773133) on March 8, 2013, and May 28, 2013 through the active connivance of the Claimant constitutes a breach of contract.

“An order that the Claimant pays to the the sum of N50 million, only as damages for breach of contract and reputation damages. And an order of the court directing the claimant to pay forthwith the sum of N30 million, fraudulently transferred by the claimant from the Bank Account of Webb Fountaine Nigeria Limited which could not be recouped from the account of Eksato Engineering Services Limited.

“An order that the claimant pays to it the sum of N1,636,484.27 million, which represent the outstanding credit facility and/or staff loan obtained by the Claimant while in the service of the bank. And an award of N2 million only, as cost of this action. And award of interest at the rate 15 percent, per annum on the judgment sum starting from the dale judgment is delivered.

Justice Agbakoba in her judgment delivered on July 28, 2022, dismissed First Bank’s preliminary objections and counter-claims, on the ground that First bank failed to satisfy the court in proofing it’s case against that claimant.

Consequently Justice Agbakoba declared “that the purported letter of dismissal dated 4th May, 2015 served on the claimant is of no effect whatsoever.

“That the Claimant’s letter of resignation dated September 2, 2014 served on the bank is valid and binding.”